Quarterback is football’s critical position. This has been true since the modern game abandoned the Single Wing and has only become “more” true in the 21st century.

The Pittsburgh Steelers have been blessed by both excellence and stability at the quarterback position for almost two decades.

But while the 2022 off season is still young, the Steelers have been jolted twice with reminders of how fleeting stability at quarterback can be. First, they lost Ben Roethlisberger to retirement. This they expected. Then, tragedy struck, and they lost Dwayne Haskins, to an untimely, horrific death. 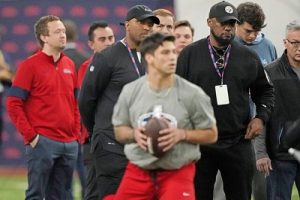 For the first time since the year summer of 2000, the Steelers will host their first quarterback competition at St. Vincents. Going into the 2022 NFL Draft, the two contestants are veteran Mason Rudolph and free agent Mitchell Turbisky.

In Mason Rudolph the Steelers have a veteran quarterback whom they graded as a first rounder and picked in the 3rd round of the 2018 NFL Draft. In those four years, Mason Rudolph has appeared in 17 games, started 10 of those, and amassed a 5-4-1 record.

Mason Rudolph was thrown to the dogs in 2019 when an elbow injury ended Ben Roethlisberger’s season after just 6 quarters.

While he won 5 of his 8 starts, he suffered a concussion, and was the victim of an assault by Myles Garrett on the road  in the infamous “Body Bag Game” against Cleveland. The truth is that Mason looked shaky and tentative – as in Kordell Stewart al la 1999 – after both of those incidents. That led to his benching in favor of Devlin Hodges.

Hodges himself got benched against the New York Jets, and Mason Rudolph looked strong in relief, only to get injured again. He played fairly well in his only start against the Browns at the end of the 2020 season but was only “OK” in the tie against Detroit.

Four years after drafting him, the Steelers still aren’t sold on Mason Rudolph, explaining their decision to sign Mitch Trubisky to a 2 year, prove it deal. The Chicago Bears made Mitch Trubisky the 2nd pick overall in the 2017 NFL Draft.

After four years as a starter, including two playoff seasons, no one wanted to give him a second contract, let alone a shot at a starting job (contrast that with the Sam Darnold trade.) Has Trubsiky been that bad? Here are some interesting numbers: 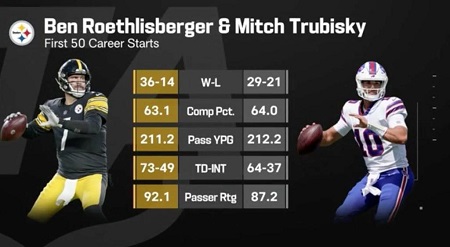 That’s an interesting if not surprising comparison. Ultimately this is a glass-half vs. glass full comparison. Either Trubisky is only a step down from Roethlisberger, or the gulf between a franchise QB and a good QB is truly defined by the margins.

The terms and length of Trubisky’s deal (1 years for about 7 million per year, plus incentives) signal that the Steelers are giving him a chance to prove he’s an NFL starter and nothing else.

Joshua Dobbs signed with the Cleveland Browns the day before Dwyane Haskins died, leaving the depth chart behind the two potential starters bare.

Kenny Pickett, Malik Willis, Matt Corral and Desmond Ridder are just a handful of the potential first round picks at quarterback that the Steelers have shown interest in. And for good reason. Both Rudoph and Trubisky have something to prove, and they have no one behind him should both falter.

Who knows? Seriously, I’m wise enough not to know that I don’t know enough to evaluate college players coming out for the NFL draft. I do know that the conventional wisdom of the “draftnics” is that this a weak quarterback class.

And the backflips that teams are doing to secure and/or keep established starting quarterbacks show that the majority of NFL personnel managers agree.

If one of the top quarterbacks is still on the board when the Steelers are on the clock, Art Rooney II, Kevin Colbert and Mike Tomlin would be wise to remember point 3 of the 4 Point Road Map to get the Steelers back to the Super Bowl:

But with that said, the focus of this series isn’t on how the Steelers can add, but what their areas of need are. And the Steelers draft needs at quarterback heading into the 2022 NFL Draft must be considered Moderate-High.