With the 2022 NFL Draft just on the horizon, it’s likely you’ve spent the past few months reminding others of their horrible post-draft takes from the past. 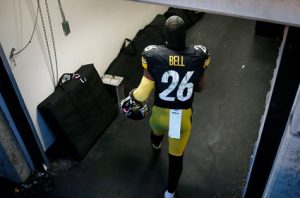 You know how the three-month period can be that starts after the Steelers season and doesn’t end until well after the draft. Let’s just say it’s quite contentious and includes many disagreements between folks who just know what the Steelers should and/or will do.

Once the Steelers have done their thing, the disagreements continue, with the ones opposed to Pittsburgh’s pick(s) usually being the loudest.

Do people get reminded of their horrible hot takes many years after the draft? The famous journalists do, for sure, but not usually the nobodies like me.

Did you know I was so angry after the Steelers selected Aaron Jones in the first round of the 1988 NFL Draft (a great hot take, btw), I lashed out at my television when Pittsburgh picked center/guard Dermontti Dawson in the second round?

Later that same draft, the Steelers selected Gordie Lockbaum, a two-way ironman superstar from tiny Holy Cross and a Heisman Trophy finalist in both 1986 and 1987, in the ninth round. I was so starved for a big name and for Pittsburgh to make a huge splash, I ran around my house screaming, “The Steelers drafted Gordie Lockbaum!” My grandfather made fun of me, and rightfully so.

I didn’t really have many horrible hot takes about the draft between the late-’80s and the social media age, thanks in large part to the Steelers being so darn successful during that time and winning many games, many division titles, and even a couple of Super Bowls.

It’s been a different story during the social media age, as my takes have been plentiful, as both a writer and podcaster.

For example, I thought Jarvis Jones, an outside linebacker the Steelers selected in the first round of the 2013 NFL Draft, would be a pick-and-plug player, someone whose slow 40-time would not be an issue at the NFL level.

I’d say I was wrong there.

I mocked the Steelers for selecting Le’Veon Bell, a running back from Michigan State, in the next round of that same draft. Why? For one thing, I wanted Pittsburgh to take Eddie Lacy, the running back I knew, instead. Also, I wanted to mock Steelers fans for their desire to get back to smashmouth football.

I was off the mark on both the Steelers’ decision to draft Bell, as well as for mocking the fans for wanting a strong running game. Bell may have had an ugly end to his career in Pittsburgh, but when he was doing his thing at the All-Pro level, there may not have been a better or more prolific running back in Steelers history.

I don’t think I’ve had many horrible takes since 2013. Although, I was glad to see the Steelers draft Artie Burns in the first round of the 2016 NFL Draft. Also, I thought it was a no-brainer for Pittsburgh to trade several picks away in order to move up to the 10th spot to select linebacker Devin Bush in the 2019 NFL Draft.

Not really on either front. No, I don’t really care that I was wrong on those aforementioned hot takes. Why? Because the draft is a crapshoot, that’s why, and there’s no point in reminding folks when they’re wrong, which is a lot of the time.

I just wanted to say that it’s okay to be wrong about the draft because NFL teams are often just as wrong and just as often.