The Pittsburgh Steelers opened Day 3 of the 2022 NFL Draft by picking Calvin Austin III, wide receiver out of Memphis in the 4th round. Austin III is the 2nd wide out picked by Pittsburgh in this draft, after they chose George Pickens of Georgia in the 2nd round.

Austin, who has a 4.32 time in the 40, originally went to Memphis on a track scholarship, although he played football for four years. During that time he caught 156 passes for 2541 yards and scored 22 touchdowns in 33 games. 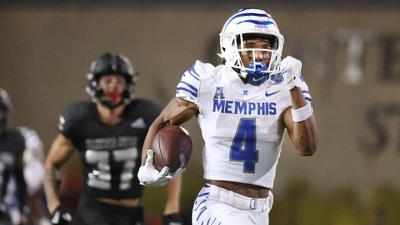 Steelers wide receiver coach Frishman Jackson explained that Austin was attractive in part because he is a player that can play both in the slot and outside. Commenting on his small stature, Austin is only 5’8”, Jackson commended Austin as a player who “goes up and attacks the ball in the air” which makes him someone who is “bigger than his size.”

Commenting on his interactions with Austin at the NFL Scouting Combine, Jackson complemented Austin as someone whom “…you felt the competitiveness in his voice when he spoke, felt the toughness that he had.”

When asked to give examples of that toughness on the field, Austin shared, “I think they were playing Temple, and I see him run across the middle to catch an end route and he’s going to get the crap hit out of him. He holds on and makes the catch.”

Here’s a look at Calvin Austin’s highlight reel, brought to you via a meld of the magic of YouTube and Word Press:

His speed is evident throughout the tape, and it looks like he has solid hands to, although you’d expect that of a pre-draft highlights tape.

What is really encouraging is his heads up play as a gunner on the punt return, as this highlights both his athleticism and sold football instincts, if not IQ.

Just two days ago the Steelers wide receivers room was a wanting place. Now, whether its Mitch Trubisky, Mason Rudolph or Kenny Pickett throwing the ball, they’ll have plenty of downfield targets beyond Chase Claypool and Diontae Johnson.