Kevin Colbert and Mike Tomlin will go to their graves swearing that they draft the best player available. So the fact that they addressed 3 our of their 4 top needs in the Steelers Draft Needs Matrix is just a conscience.

He is a versatile lineman who played multiple positions in 33 games at Texas A&M while amassing 13 sacks, 1 interception and 133 tackles. Steelers defensive coordinator Teryl Austin mentioned many times that he expects Leal to add to his 6’4 273 frame, and almost slipped out his draft grade, while admitting that they had a “nice grade on him.” 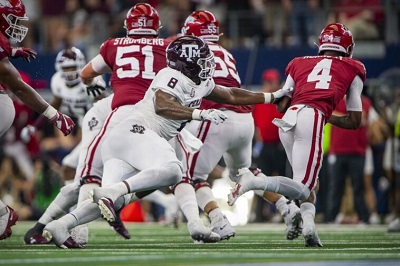 Austin also acknowledged the elephant on the room by admitting, “”It’s really important to add young guys in there.” With Cam Heyward, Stephon Tuitt and Tyson Alualu all over 30 and Isaiahh Loudermilk the only young prospect with serious “upside,” the Steelers defensive line will benefit from the injection of youth.

With that said, the fact that the Steelers waited until the third round, drafting quarterback Kenny Pickett in the first, and wide receiver George Pickens in the 2nd gives us a reasonably firm indication that Tomlin, Austin, and defensive line coach Karl Dunbar expect Stephon Tuitt to play in 2022.

Tuitt of course made the initial 53 man roster, only to sit out the entire season for reasons that still haven’t been explained. At his pre-draft press conference Mike Tomlin declined to confirm whether Tuitt has been attending voluntary workouts.

Here’s a look at the some tape that Leal put together while at Texas A&M.

Impressive to say the least.