Once upon a time, precisely 14,247 days ago, the Pittsburgh Steelers made a decision they would live to regret. It was spring 1983. All but a handful of the Super Steelers had begun their “Life’s Work.” Terry Bradshaw‘s arm was fading. It only had a few throws left in it. 8 to be precise.

It was time to rebuild. Chuck Noll told Dan Rooney, “We started on defense last time, lets start there again.” So it came to pass that the Pittsburgh Steelers drafted Gabe Rivera and passed on University of Pittsburgh star Dan Marino in the 1983 NFL Draft.

Last night, in the first draft of the post Ben Roethlisberger era, Mike Tomlin, Kevin Colbert and Art Rooney II tried to undo that decision by drafting Pitt’s Kenny Pickett in the first round of the 2022 NFL Draft.

The Steelers actively scouted top prospects such as Mississippi’s Matt Corral, Cincinnati’s Desmond Ridder and North Carolina’s Sam Howell and Liberty’s Malik Willis. In fact, everyone thought Tomlin had fallen hard for Willis, bringing not only Kevin Colbert, but also Art Rooney II to Lynchburg, Virginia for his pro day. 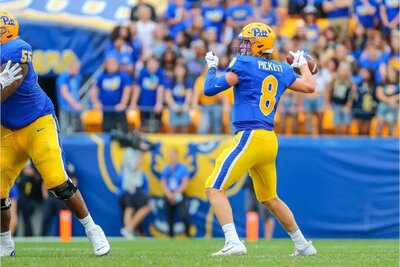 But as Tomlin explained, “We circled the globe — or at least the United States — for the last several months, exploring and researching. It’s funny we ended up with the guy from next door.” Most pre-draft analysts, both inside and outside of Pittsburgh, thought the Steelers would take Willis.

And maybe their love for him was real. And it probably was, it just wasn’t as strong as it was for Pickett. As Kevin Colbert explained, “Honestly, I never thought he would make it to us.” Kenny Pickett was considered the top, most NFL ready prospect in the 2022 NFL Draft, and no one expected him to make it to the 20th pick.

Kevin Colbert readily admitted the fact that the Steelers had seen Pickett grow and evolve helped with the process, conceding that sometimes such extensive exposure is unfair to Pitt players.

However, this worked in Pickett’s favor as Colbert explained, “But honestly, Kenny developed, obviously had a great senior year, and it was a good move for him to stay in school. It just talks and preaches about what you can do when you stay and continue to develop and turn into a first-round pick. Kenny is special.”

Even if Pickett is considered the most NFL-ready prospect, many scouts had concerns about his small hands, which was an issue for Dave Kreig back in the 80’s and 90’s. Kevin Colbert dismissed this concern outright, “It was never a factor. His fumble rate was not anywhere near a problem. He could certainly throw the football.”

One benefit of playing at Pitt for five years is that it gives Pickett a large body of highlights to draw from. Here are a few of them:

While the decision to draft Pickett certainly has its critics, the reaction in Pittsburgh and in Steelers Nation has been largely positive. But there are two people who can’t be happy in Mitchell Trubisky and Mason Rudolph. 24 hours ago both men were slated to compete for the starting job at St. Vincents this summer.

As of now, one of them is looking at staying at third string and spending the season in street clothes holding a clipboard.

Mike Tomlin confirmed Pickett will get a chance to win the starting job. That’s a hard pill to swallow. Early in the off season Rudolph confirmed that the Steelers had told him they would bring in a quarterback to compete. He said he welcomed it.

Now the Steelers have brought in two. That quarterback isn’t just the consensus best in the 2022 NFL Draft, he’s also a hometown hero who has already logged more starts at Heinz Field that Rudolph ever will. Such is life in the NFL.