With their first pick in the 7th round of the 2022 NFL Draft the Pittsburgh Steelers picked Mark Robinson, an inside linebacker from Ole Miss. 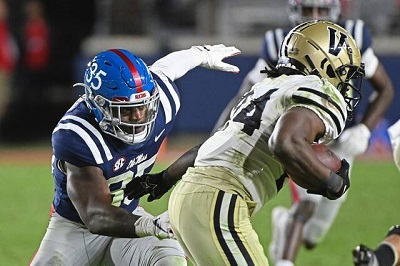 However, Steelers linebackers coach Brian Flores said that was one of the things that made him attractive to Pittsburgh, detailing, “That’s part of what we liked about him, there’s some upside here. This is somebody who hasn’t played the position for a long time, but he shows speed, he shows athleticism, he shows toughness, physicality. He does a lot of things we like. He’s a fun guy to watch on film.”

Flores also offered that Robinson’s experience as running back, perhaps helped him make the transition to the other side of the ball.

Flores confirmed that while Robinson faced a learning curve in making this position change, his improvement was evident throughout the season. Last year he played in 13 games for Ole Miss, making 91 total tackles, 5.5 for losses and registered 3 sacks.

7th round picks by definition have to fight to find a way onto the 53 man roster. But Robinson might benefit from the fact that the Steelers depth at outside linebacker is thin. Behind T.J. Watt and Alex Highsmith the Steelers have Genard Avery, journeyman John Simon, along with futures contract signees Tegray Scales, Delontae Scott on their roster.

With that said, his draft card from ESPN listed him as an outside linebacker, but the Steelers will apparently play him on the inside. The situation is far more crowded at inside linebacker with Devin Bush, Myles Jack, Robert Spillane and Marcus Allen.

But these situations are often fluid. The Steelers initially drafted Lawrence Timmons as an outside linebacker and didn’t move him to the inside until his second year.

Beyond that, like all rookies, Robinson’s surest way to cement a roster spot is to prove that he can play and contribute on special teams. Brian Flores has some background in special teams, and promised to steer him in the right direction.