Tragedy has struck the Pittsburgh Steelers as backup quarterback Dwayne Haskins died today, Saturday April 9th, 2022 after being hit by a car in South Florida. According to Chris Adamaski of the Pittsburgh Tribune-Review, Haskins was in Florida at an off season workout hosted by Mitch Trubisky, along with Mason Rudolph, Najee Harris, Pat Freiermuth, Benny Snell, Chase Claypool, Gunner Olszewski and several other Steelers. 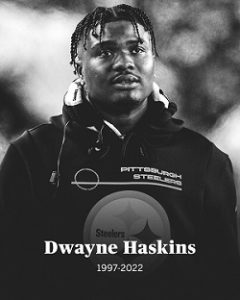 Dwyane Haskins was 24 and is survived by his wife Kalabrya. Steelers head coach Mike Tomlin made the following statement:

I am devastated and at a loss for words with the unfortunate passing of Dwayne Haskins. He quickly became part of our Steelers family upon his arrival in Pittsburgh and was one of our hardest workers, both on the field and in our community. Dwayne was a great teammate, but even more so a tremendous friend to so many. I am truly heartbroken.
Our thoughts and prayers are with his wife, Kalabrya, and his entire family during this difficult time.

Dwayne Haskins was a standout player for The Bullis School, an elite prep school in Potomac, Maryland who played his college ball for Ohio State, and was a contender for the Heisman Trophy in 2018. Daniel Snyder wasted little time in bringing Haskins back to Washington, picking him 15th in the first round of the 2019 NFL Draft.

Haskins took over the starting role in mid-2019, but his tenure was brief. Haskins got benched after 4 games in the 2020 season, returned to a starting role in week 14, but was cut before the end of the season when social media pictures surfaced of Haskins at an event that clearly violated COVID-19 protocols. 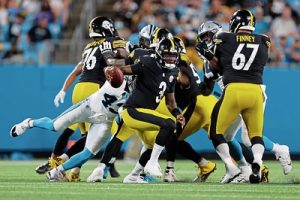 With Ben Roethlisberger‘s “Life’s Work” rapidly coming into focus, the Steelers signed Haskins early in the 2021 off season.

However, the Steelers only offered him the league minimum, and resigned Joshua Dobbs, further putting Haskins on notice that he’d need to earn his roster spot. By all accounts, Haskins played well during training camp. He saw extended duty early in preseason, looking very good as the second quarterback in the rotation.

While the Steelers offered Haskins an Exclusive Rights Free Agent tender to start the 2022 off season, it was also clear that Haskins would need to earn a roster spot. Sadly, destiny has robbed him of that chance.