The 2022 NFL Draft is now history. In Kevin Colbert’s finale, the Pittsburgh Steelers bucked the conventional wisdom and drafted Kenny Pickett in the first round. They also addressed wide receiver and defensive line with their premium picks.

So now time to get down to grades – grades for the Steelers 2017 Draft Class. 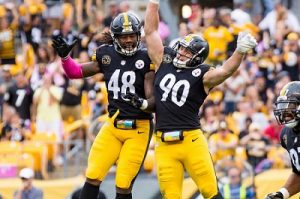 29 teams drafted before the Pittsburgh Steelers that day. The Kanas City Chiefs picked Patrick Mahomes. The other 28 wished they’d picked T.J. Watt instead.

In 5 years T.J. Watt has put himself on a Hall of Fame trajectory. He’s a playmaker and possibly a generational talent. It is conceivable that during his 6th year he’ll break the Steelers All Time sack record. Grade: Grand Slam

Second Round: JuJu Smith-Schuster — A True Steelers from the Get Go

JuJu Smith-Schuster landed in Pittsburgh and eventually pushed not one, but two players off of the team. He had a phenomenal rookie year and followed it up with a team MVP performance. His 3rd year was marred by injuries, poor quarterback performance and an imploding offense.

Even if his numbers never bounced back in year’s four and five, JuJu Smith-Schuster was still a factor on the team, still a player who gave his all on every play. Grade: Quality Value Pick

Third Round A: Cam Sutton – The Late Bloomer

Cam Sutton is the second to last defensive back drafted during Carnell Lake’s tenure as secondary coach, and he’s probably the best. Sutton got onto the field in late 2017, played more in 2018, and began making plays at a steady pace through 2019 and 2020. Facing salary cap Armageddon in the 2020 Off Season the Steelers targeted Sutton for an extension and he delivered in 2021. Grade: Quality Value Pick 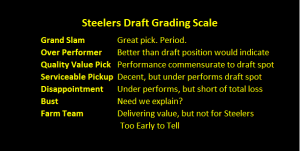 Third Round B: James Conner – The Home Town Hero

In minds of many, James Conner’s Steelers career is measured by what it wasn’t, rather than what it was. As Tony Defeo pointed out in his free agent profile, that’s not fair to Conner. At all.

James Conner’s body of work with the Pittsburgh Steelers reveals him as a good running back. Not a great one, but a good one. The injuries aren’t Conner’s fault. Nor is the fact that a once great offensive line slipped into deep decline just when he needed him the most. Grade: Quality Value Pick

Joshua Dobbs was a bit of a surprise pick and became the type of player that just kept sticking on.

His body of work with the Steelers is limited. His first pass was, well, like a rocket converting a third down on the road deep in Baltimore territory in spot duty. He looked good in his limited action in the 2020 finale. And the Rocket Scientist turned backup QB was a constant fixture along side Ben Roethlisberger reviewing plays on tablets. All that’s good, but you still expect a bit more from a 4th rounder. Grade: Serviceable Pickup

The Steelers drafted Brian Allen as a project. Allen had only switched to cornerback for his final two years at Utah. But at 6’3” and 215 pounds and with long arms, and with a 4.48 40 time he had all of the measurables.

Brian Allen saw action on special teams in 16 games over two years with the Steelers and then was waived/injured at the end of training camp in 2019. He latched on to a number of practice squads in 2019, played 24 defensive snaps for the 49ers in 2020 appearing on one game, and appeared in 3 games on special teams for the Browns in 2021. Grade: Bust

My immediate reaction to the Steelers decision to use a draft pick on a long snapper was, “Colbert and Tomlin are getting cocky.” It just seemed like a waste of a pick. And it sort of was. Colin Holba didn’t make the team, but got pick up by the Jaguars, who spanked the Steelers in the playoffs. He also played for the 49ers and Giants in the next three seasons. Grade: Farm Team

Seventh Round:  – The Unsung Linebacker that Never Was

With the depth chart ahead of him it didn’t seem like Keion Adams stood a chance at making the team when they drafted him in 2017. However, his story reminded this scribe of Carlos Emmons, another 7th round linebacker who faced a stacked depth chart to make the team and eventually work himself into a serviceable starter.

Alas, Adams would not follow in Carlos Emmon’s footsteps. He spent 2017 on IR, got cut at the end of summer in 2018, spent a day on the practice squad, spent some time with the Giants and was done.

One Grand Slam, 3 Quality Value Picks, 1 Serviceable Pickup, 1 Bust and 1 Farm Team Pick. Moreover, the first 4 picks became starters, all four got second contracts, 2 with the Steelers. And of course the first rounder is on a Hall of Fame trajectory. Grade: A+