The Pittsburgh Steelers 2022 Draft Class, Kevin Colbert’s final one, is complete. How well did Colbert do? What “grade” did he get for his final draft? That question will take several years to answer.

When Kevin Colbert returned to Pittsburgh in the winter of 2000, the Steelers were reeling. The 1999 Steelers had finished 6-10, as Bill Cowher feuded with Tom Donahoe while Kordell Stewart’s regression continued. Although Kordell Stewart had signed a big contract after a shaky 1998 season, the conventional wisdom was that the Steelers should move on.

The consensus among the draft pundits was that Kevin Colbert should begin his tenure by turning the page at quarterback and drafting Chad Pennington. And really, how many new general managers wouldn’t jump at the chance to put their on stamp on a franchise by drafting a quarterback with their first pick?

Kevin Colbert wasn’t having any of it. For Colbert, it was never about his ego and always about making the right decision. So he and Cowher ignored the pleas from the peanut gallery, followed their own counsel, drafted Plaxico Burress, posted a winning record in 2000 and were in the AFC Championship in 2001.

Ben Roethlisberger had just retired, and the franchise is suffering drought of playoff wins. The conventional wisdom among both pundits and actually NFL personnel men was that this was a historically weak draft class. 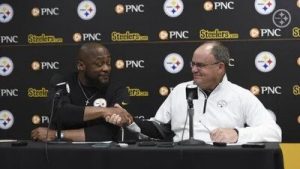 The prevailing opinion, including mine, is that the wise move for Kevin Colbert would have been to address other needs and allow his successor to find a franchise quarterback in 2023 when the class is said to be stronger.

Let’s take a quick look at the others who join Pickett as part of the Steelers 2022 Draft Class.

Steelers 2022 Draft Class at a Glance

Because Kevin Colbert finished his days in the draft room the way he began them, by marching to his own drummer, its tempting to argue that Kenny Pickett’s success or failure will define Kevin Colbert’s final effort.

There’s no question that if Kenny Pickett leads the Steelers up the Stairway to Seven, we’ll all say, “Yes, Kevin Colbert sure went out with a bang.” But, remember, Pickett doesn’t necessarily need to become a true, Joe Burrowesque franchise quarterback to do that.

And even if Kenny Pickett becomes a bust, that wouldn’t define Colbert’s final draft, let alone his legacy. Think back to the 2000 draft. Plaxico Burress certainly was a good player for the Steelers, but he won his Super Bowl with the Giants. But during the ’00 draft, the Steelers also added Marvel Smith and Clark Haggans, both of whom started Super Bowl XL.

That was of course the first of two Super Bowls Colbert helped bring back to Pittsburgh, the other being Super Bowl XLIII.

And the real lesson of Colbert’s legacy that extends through is final draft can be found in his own words, as he reflected on his role in adding to the organization’s Lombardi count, “… and being able to add to that room means a ton. But it doesn’t mean it’s over. The next step, I mean, we’ve got to get more, and we’ll never lose that. But it means a lot.”