The Watch Tower’s Lights have been dim for too long, but they’re lighting up today to say “Hail and Farewell” to a long time friend.

The winds of change are sweeping the Pittsburgh Steelers and Steelers Nation this off season. First Ben Roethlisberger retired. Then came Kevin Colbert’s final draft. And now, long time Steelers scribe the “Dean” of the Steelers press crops Ed Bouchette is retiring.

Ed Bouchette announced his retirement on a local Pittsburgh radio show The Fan Morning Show . A day later he followed with a farewell column in The Athletic that has drawn over 450 comments. 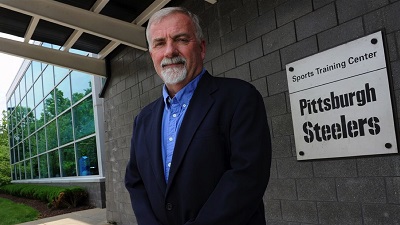 Such a retirement calls to mind Pittsburgh native David McCollough’s observation that by the time Franklin Roosevelt died, many Americans didn’t think of him such much as the President but rather as the Presidency itself.

The fact that Bouchette began covering the Steelers in 1974 – when this writer was only two – and has been on the beat since 1985 helps a lot. But if such longevity is necessary, it is hardly sufficient. And below we’ll take just a moment to explain why.

As a child of re-located Pittsburghers who weren’t football fans, I had to self-educate on the Steelers.

That education took place in the form of reading newspapers at my grandparents’ homes on trips to Pittsburgh in the late ‘80s. Before too long newspapers became mandatory cargo for any and all family members traveling either up or down the Turnpike and I-70.

By 1988ish I knew who Gene Collier and Bob Smizik were. I honestly can’t tell you when the name “Ed Bouchette” started meaning something to me. In a way, that’s fitting.

Someone reared and raised in a generation when a reporter’s first job was to avoid making his or herself as part of the story.

But even if I didn’t know who he was, Ed Bouchette played a vital role in bringing tone and color to the 1989 Steelers storybook season to life in a way that Washington Post sports section and ESPN NFL PrimeTime highlights never could.

Those were days long before interviews lived forever on Twitter, before you could watch the Immaculate Reception at the press of a button or watch a press conference at your convenience from say, Buenos Aires. Thanks to Ed Bouchtte’s slogging through the depths of old AFC Central locker rooms, I got a feel for how men like Merril Hoge, Bubby Brister, Rod Woodson, Rodney Carter, Greg Lloyd and Delton Hall authored the most improbable in-season turn around in NFL history. 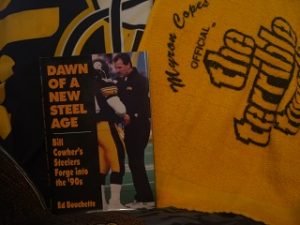 Bill Cowher on the cover of Ed Bouchett’s Dawn of a New Steel Age.

But I think what really cemented Ed Bouchette as an authorities Steelers voice was the Dawn of a New Steel Age, the book Bouchette authored on Bill Cowher’s 1992 season. Bouchette’s book remains special to this day because of his unique ability to capture the feel and texture of the moment as Cowher Power was awakening Steelers Nation while also gaining an understanding the historical context  behind that transformation. (You can read the full review of Dawn of a New Steel Age here.)

From then on out, anytime any bit of news or rumor reached me about the Steelers, my first instinct was “OK, what does Bouchette have to say about this?”

Bouchette Cuts Against the Grain, Graciously

If Ed Bouchette did embody the old “newspaper” man ethos in so many ways, there’s one way he was an exception, and that exception endeared him to so many.

While I did publish a few articles in the now-defunct Buenos Aires Herald, I did a lot more freelance writing than I did publishing. That experience involved banging heads against the wall with editors who would “lose” articles they promised to publish. That only happened once in part because I learned that editors often couldn’t even be bothered to read an email pitching an article.

When I vented about this to a friend who worked in journalism, he told me, “Welcome to the world of newspapers where, as a rule, the more widely read you are, the ruder you.”

Well, Ed Bouchette is probably Pittsburgh’s most widely-read journalist, but you’d be hard pressed to find someone more polite, friendly or helpful. Here’s one such example:

I was a scrub reporter, feeling out of my element at Saint Vincent. Hall of Fame member and voter @EdBouchette came up to me and talked for 10 minutes. Said hi every day. Answered questions. One of the nicest guys I've met in this business. Congratulations, Ed! Best of luck

The first time I contacted him for a comment about an article, he blew me away by complementing my work and sending me his cellphone number. Through the years he helped me out with a number of articles. And, when I pointed out an error in a Post Gazette story that referenced the ’88 quarterback competition at St. Vincents, he couldn’t have been more appreciate in his response.

One thing that has surprised me, is that both when I asked him about his favorite stories from the PG days and in his farewell article, Bouchette shared a few specifics, but didn’t supply a long list of articles you might expect of a journalist of his tenure.

One, because for Bouchette, its never been about him, its always been about the story. Second, I also suspect that as an old newspaper man, Bouchette quickly accustomed himself to rushing his copy in by deadline in the evening, watching it go out the door the next morning and then seeing used as fish wrappers by the next day.

When asked why he’s retiring, Bouchette echoed Chuck Noll, explaining “Its time.” That’s a fitting reference. In Bouchette’s story on Noll’s retirement, he closed by quoting Noll as saying, ‘”Don’t leave anything on the beach but your footprints,’” and then reminded readers that the 4 Super Bowl trophies in the lobby at Three Rivers Stadium were Noll’s footprints.

On in the digital pages of the Post-Gazette, The Athletic, and within Google Newspaper Archives. The city of Pittsburgh and Steelers Nation are lucky to have them.