I just turned 50 not long ago, and I don’t know if you know anything about math and age, but that’s getting up there in both categories.

Yes, 50 is the new 40, but try telling that to the 38-year-old at the bar who thinks you’re ancient while watching you try to look hip as you bust out a tune on Karaoke Night. (For the record, I don’t blame that 38-year-old one bit, because that’s what I thought about 50-year-olds 12 years ago.) 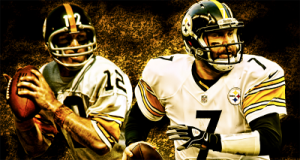 Anyway, as it pertains to the Pittsburgh Steelers, I have been watching this team play football since January of 1980 when I was just seven. That’s a long time to watch any sports franchise do anything. Fortunately for yours truly, the great memories far outweigh the bad ones. My first memory — Super Bowl XIV between the Steelers and Rams –showcased quarterback Terry Bradshaw, the MVP of the Big Game for the second year in a row, and his awesome talents. My most recent Steelers memory, a blowout loss to the Chiefs in a wildcard playoff game this past January, was the last hurrah for legendary quarterback Ben Roethlisberger after 18 glorious seasons.

Needless to say, I’ve seen a lot of great things as a Steelers fan over the years. Even the seasons in between The Blond Bomber and Big Ben weren’t all that bad in terms of success on the football field.

Yes, the 1980s were kind of meh after the incredible success of the previous decade. However, there were still some great moments to cherish, like the upset of the Broncos in the divisional round of the 1984 playoffs, as well as the thrilling overtime wildcard road win over the hated Oilers to close out the decade.

What about the 1990s under new head coach, Bill Cowher, who had the unenviable task of succeeding the legendary Chuck Noll on the sidelines of old Three Rivers Stadium? The Chin sure had TRS rocking again like the Super ’70s, right? And while the Steelers never brought home One For The Thumb in Cowher’s initial postseason run when he took Pittsburgh to the playoffs during his first six seasons, in many ways, it was the most fun I’ve ever had watching my favorite football team.

Obviously, the decade of the 2000s saw Cowher finally bring his hometown team a fifth Lombardi Trophy with a win in Super Bowl XL. Not long after that, Mike Tomlin, who took over for Cowher as head coach in 2007, gave us “Got Six?” following a thrilling victory over the Cardinals in Super Bowl XLIII.

As far as post-Super Bowl decades go, the 2010s weren’t nearly as meh as the 1980s. In fact, the Steelers’ 2000s run bled over into the 10s when they advanced to Super Bowl XLV before losing a heartbreaker to the Packers down in Dallas.

While the second Super Bowl era officially ended in an overtime loss to Tim Tebow and the 8-8 Broncos in a wildcard playoff game following the 2011 regular season, it didn’t take long for Pittsburgh to overhaul its roster and become a bona fide contender again by the mid-10s.

Holy smokes, I just realized we’re only months away from witnessing the Steelers’ third regular-season campaign of the 2020s. That means that the 2000s are like the ’70s to someone in their early-20s. Yikes. Not only have they grown up only knowing Roethlisberger as the Steelers quarterback, they probably have no clue who Bradshaw even is, or if they do, he’s like who Johnny Unitas was to me as a kid — someone who played in the Before Time when dinosaurs roamed the Earth.

Man, I’m getting up there. I’ve seen both Joe Greene and Cam Heyward. I’ve been around for both Jack Ham and T.J. Watt. 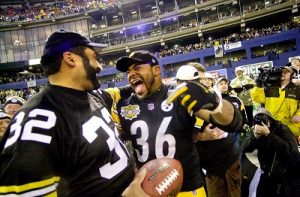 I remember where I was when the Steelers cut Franco Harris. I know exactly where I was standing when I learned that the Steelers had traded for Jerome Bettis. I can still recall the sick feeling that I had in the pit of my stomach when Le’Veon Bell suffered a hyperextended knee on the eve of the 2014 postseason. I still have the text from my brother, who has a source within the Steelers organization, that informed me before just about anyone else that Pittsburgh was going to select Najee Harris in the first round of the 2021 NFL Draft.

Again, I’ve seen a lot. I know this because younger people I argue with on Twitter now say things to me like, “I’m not wasting my time trying to reason with some old dude who probably has low testosterone.” Yes, while it’s true that my t-levels are probably lower at the age of 50 than they were at the age of 25, what does that have to do with my opinion on the Steelers’ backup running back situation?

Anyway, even though I’m now officially old (if I already wasn’t in my 40s), I still love the game of football as much now as I ever did. I respect its evolution. I don’t yearn for the days of Yesteryear when Smashmouth football was all the rage and “Defense Wins Championships” was a mantra that everyone actually believed to be true.

I’m a football purist, but only in the sense that I think the game is a pure joy to watch. I still get those butterflies in my stomach when the calendar turns to July and I know that we’re right on the doorstep of another Steelers training camp.

My only concern is what my response will be to the next Steelers title. Will it feel as magical to me as an older fan as the march to 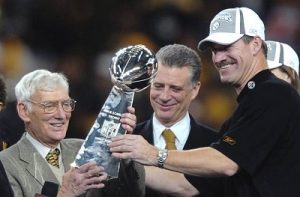 did when I was 33? I often think back to that two-month period from December of 2005 to February of 2006 when the Steelers went on their historic run and never stopped winning until they finally added a fifth Lombardi to their trophy case.

Will I ever have that feeling again? How do older sports fans, especially ones who have already witnessed a few championships, respond to a team winning it all? Is it just as fulfilling as it was in your youth?

As the Steelers begin a new era with a new quarterback–it’s either going to be Mitchell Trubisky, Mason Rudolph or Kenny Pickett who gets the first crack at replacing Big Ben–I sure can’t wait to find out.