After interviewing 16 candidates from around the NFL to find Kevin Colbert’s replacement, Steelers President Art Rooney II settled on one who has been in his own back yard since 2001, naming Omar Khan as the next General Manager. 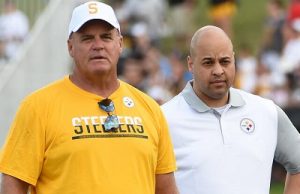 In a statement released by the team, Khan commented:

I am extremely excited for this opportunity to be the General Manager of the Pittsburgh Steelers. I would like to thank Art Rooney II, Mike Tomlin, and Kevin Colbert for their support throughout this process. I am ready for this challenge and grateful to continue the success we have had on the field during my first 21 years. I look forward to completing our football operations staff and working tirelessly to build another championship football team for Steelers Nation and our community.

The choice of Khan does represent a bit of a departure for the Steelers in that his background is on the business side of the operations, as opposed to scouting. (Although Khan did gain scouting experience while working with the New Orleans Saints.

Andy Weidl of the Philadelphia Eagles, who was also a finalist to replace Colbert, will reportedly join the team as Assistant General Manager, although the hire has not yet been announced.

There’s been no word on what role if any Brandon Hunt, the Steelers current Pro Scouting Coordinator will play with the organization. Hunt interviewed and was a finalist for the job.

In another sense the Steelers decision to promote Khan from within is in keeping with their MO for hiring a front office head. For all intents and purposes, Art Rooney Jr. was the first head of the Steelers scouting department.

And when Chuck Noll retired and Haley left the Steelers, Dan Rooney promoted Tom Donahoe as Director of Football Operations. When the breach between Bill Cowher and Tom Donahoe became unbridgeable, Dan Rooney again interviewed candidates from across the league, only to settle on Kevin Colbert, who was not only a Pittsburgh native, but an alumni of North Catholic, the same high school that Rooney and Donahoe had attended.

Dan Rooney hired Chuck Noll from outside the organization (OK, it’s not like Bill Austin’s staff was stocked with up and comers). When Noll stepped down, the smart money was on Joe Greene as his replacement.

But an exhaustive search lead them to Bill Cowher. When Bill Cowher hung it up, the front runners to replace him were Russ Grimm and Ken Whisenhunt. Both men were serious contenders and Grimm was one of the finalists, but the job ultimately went to Mike Tomlin, who was with the Minnesota Vikings.