Staff writer Tony Defeo recently published an article waxing on what it’s like to be a Steelers fan reaching 50. With a nod to Jimmy Buffett, its titled “A Steelers Fan Looks at 50.”

While I’m still a few months (ok, weeks) from passing the half century mark myself, it got me thinking about some of the unique touchstones that mark me and my fellow Generation Xers as Steelers fans. 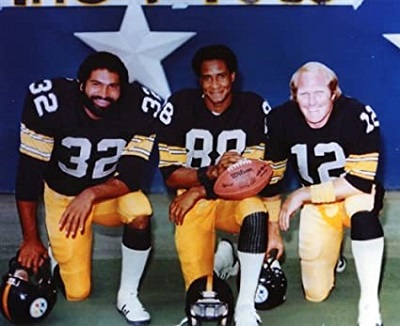 1. You had this photo on your wall.

In 1980, you could get a copy of this photo of Franco Harris, Lynn Swann and Terry Bradshaw through a promo run by either the Pittsburgh Press or Giant Eagle. My aunt and God Mother who lived in Monroeville called down to Maryland asking if my brother and I wanted copies. Of course we did! They hung on our bedroom walls just as they hung on yours for years to come.

2. You remember when Pittsburgh really was the Steel City.

Arriving in Pittsburgh from Maryland usually meant taking the Parkway into downtown from the Turnpike. So my first views of Pittsburgh were of J&L’s blast furnaces. They were truly awesome. (Don’t try Googling the terms, just trust memory here.) They were just as awesome as the gastly smells you’d have to endure as we took Carson Street to Becks Run Road en route to Brentwood-Carrick.

The mills are long gone, but seeing them, even in their twilight, was special.

3. You thought Queen wrote “We Are the Champions” for the Steelers.

My older sister and brother told me that Queen had written “We are the Champions” for the Steelers. As a naïve first grader I believed them. But why shouldn’t I have? The Steelers were the champions. At 6 years old that felt like a permanent condition.

4. You parents had to convince you that the Steelers were terrible once.

My parents are Pittsburghers to their cores, but neither is a football fan. When I asked them what it was like rooting for the Steelers when they were kids, my mom would explain “You have to understand. The Steelers and Pirates were terrible when we were kids.” History proves them right, especially for the Steelers. But I sure was one skeptical seven year old. 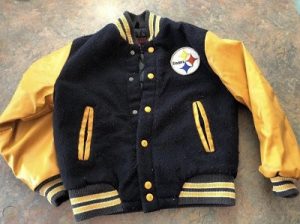 I got one of these from my older cousin David. I couldn’t WAIT to grow into it! Photo Courtesy of @Vintage Steelers

5. Kids made fun of you as you kept wearing Steelers stuff into the 80’s.

I wore my gear anyway, because Steelers fans are loyal.

6. Hearing the words “Immaculate Reception” caused you to run to the TV.

Today you can watch the “Immaculate Reception” at the touch of a button while say, slogging through Buenos Aires down Aveneda Directorio on Bus 126 from Flores to Puerto Madero if you so choose.

But I remember as a kid my older brother made a point of showing me the “Immaculate Reception” while watching NFL Films. And for the next several decades, I made it a point to watch the play every chance I got. Kids today are spoiled indeed.

7. You often learned of the results from Sunday’s games on Monday morning.

This is unique to children of the Pittsburgh diaspora, but before the age of the internet, or even cable TV there were plenty of times when I’d have to wait until Monday morning to learn the results of Sunday’s Steelers game. And in the ‘80s, that could lead to a lot of downers at the breakfast table. Although there were pleasant surprises….

8. The 1989 Steelers will always carry a special place in your heart.

The Boomers before us and the Millennials came after us who were reared on Super Bowls don’t understand. But we do. Starting in 1987 we saw flashes of greatness. We even convinced ourselves we could glimpse positives in the 3-1 close to the dismal 5-11 1988 campaign.

The 1989 Steelers story book season validated our faith and we felt like we’d closed the door on the 80’s by opening the door to a second Super Bowl era. That didn’t happen, but boy, it sure felt good to believe.

9. When fans attack the offensive coordinator your reflex is: “Yeah. …But Joe Walton was worse.”

Offensive coordinators are the favorite whipping boys of Steelers fans, whether you’re talking about Chan Gailey, Ray Sherman, Kevin Gilbride, Bruce Arians or Todd Haley. But Generation X Steelers fans know that none of them was worse than Joe Walton, even if in middle age we’ve grown to appreciate Walton as an outstanding person who did a lot of Western Pennsylvania football at Robert Morris.

10 a. The split back or “Pro” style offense looks normal.

Thanks to Franco Harris and Rocky Bleier, Frank Pollard and Walter Abercrombie, and Merril Hoge and Tim Worley, the sight of two running backs lined up behind the quarterback will always be “normal.” 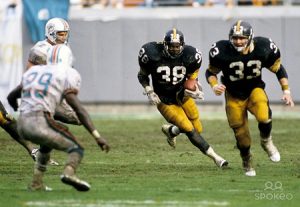 10 b. You still scream for the fullback to get carries.

Your mind understands how and why the game has changed, but every time “they” talk about cutting Jerome Bettis, Le’Veon Bell’s or Najee Harris’ workload your heart screams “Why can’t they just let the fullback run the ball?”

OK. Let’s concede that James Psihoulis’ aka Jimmy Pol’s fight song is the property of our parent’s and our grandparent’s generation. But I first heard the song during the ’93 season on my first trip to a Steelers bar (Baltimore’s legendary Purple Goose Saloon no less).

It was the sound of heaven. Listen for yourself:

I mean no disrespect to “Here We Go,” “Black and Yellow,” “Climbing the Stairway to Seven,” or any of the other fight songs. But the “Western Pennsylvania Polka,” from Jimmy Pol’s thick Pittsburgh accent, to the passion in which he implores “…Let’s go and score, and never ever yield!” while invoking Joe Greene, Chuck Noll’s “hunky friends,” Franco’s Army and Gerela’s Gorillas perfectly preserves the Super Steelers and Pittsburgh’s essence.

12. You once thought Dan Rooney was “Cheap” or you defended him.

In the 1990’s, spring free agent exoduses out of Pittsburgh were the norm. In the days before Heinz Field, the Steelers didn’t have the revenue to compete. Fans didn’t want to hear it and wrote Dan Rooney off as “cheap,” while others, like me, defended him. These arguments were staples of our 20-something bar room banter. 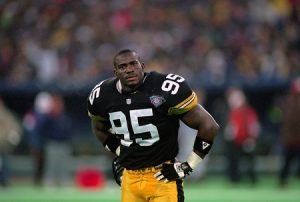 Whether “Just Plain Nasty,” or “I wasn’t hired for my disposition” lights your fire, you loved your “Avoid Lloyd” shirt and you instinctively know that no other Pittsburgh Steeler else can ever live up to the standard that Greg Lloyd set when he donned number 95.

15. You try, and fail, to explain Myron Cope to a new generation.

In 1992, Sports Illustrated described Myron Cope as the soul of the Pittsburgh Steelers. They were right.  Yet Myron was someone to be experienced in real time, and attempts to explain him ultimately fall short. But it is your duty to try.

There you go in Steelers Nation. Those are my top 15 (ok, 16) memories or touchstones that unique to Generation X Steelers fans.

While we all share a love for the Black and Gold, each of us has your unique way of finding it. Take a moment to leave a comment and share your additions to the list. (Comments are moderate to keep out the spammers and tolls, but if you write something it will get published.)