Football is an intense sport. Perhaps the most intense. Yet rarely do you see someone expose the depths of their soul the way Kevin Colbert did in his press conference announcing the Steelers 2022 Draft class.

Colbert was reluctant to take credit. He refused to fall back statistics on the team’s record or draft successes. He felt no need to clarify that he “knew the task” to was winning championships, only stating “It was four” and then humbly offered “being able to add to that room” meant a ton before affirming “we’ve got to get more.” 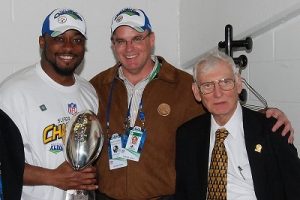 The path to understanding difficulty of winning a Super Bowl maps directly to the cracks in Kevin Colbert’s cracks voice.

I don’t and won’t pretend to know what flashed through Kevin Colbert’s mind as he struggled through those words, but I know I what leap into my consciousness as I heard them:

During his 22 years with the Pittsburgh Steelers, Kevin Colbert drafted 183 players. He probably signed twice as many undrafted rookie free agents, including men like Dan Kreider, Willie Parker and Nate Washington. He signed dozens of free agents, from All Pros like Jeff Hartings, James Farrior, and Ryan Clark, to forgotten role players like Mike Logan, Travis Kirschke, and Duce Staley.

All of those moves were necessary, in their own way, to delivering victory in Super Bowl XL and Super Bowl XLIII. But absent those five critical plays mentioned above their sum would have been insufficient.

They did not, and arguing to the contrary would be fundamentally disrespectful to so many other players. But those 5 plays enabled the others contributions.

Had Ben Roethlisberger not stopped Harper, Bryant McFadden’s once in a life-time pass defense over future Hall of Famer Reggie Wayne, never happens. Nor would Mike Vanderjagt’s epic fail hold its unique niche in Steelers lore. 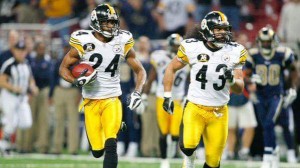 When Ike Taylor made his interception on the Pittsburgh’s 5 yard line, he reversed the momentum was decidedly in Seattle’s favor. Antwaan Randle El and Hines Ward perhaps still could have made their magic, but that would have only gotten the Steelers back in the game instead of helping icing the win. Ditto Deshea Townsend’s sack.

Troy Polamalu’s pick six in the AFC Championship didn’t just flip a game that the Ravens had been methodically wresting control of, it also exorcised the demons of 3 straight AFC Championship losses the Steelers had suffered on Pittsburgh soil.

In the immediate aftermath of Super Bowl XLIII, James Harrison’s pick six almost got forgotten. But this one comes down to simple math: It was a four-point swing (at minimum) in a game that the Steelers won by 27 to 23. Yes, defense STILL wins championships.

Ben Roethlisberger’s pass to Santonio Holmes is perhaps the greatest 6-yard completion in the history of the game capping one of most fabled comeback drives in Super Bowl history.

It is tempting to look at those plays and conclude “Yeah, Kevin Colbert really needed a ton of luck to get his Super Bowls.” The opposite in fact is true. These plays were so extraordinary because they were being made by the best of the best at the moment when they were needed the most.

Kevin Colbert brought them all Pittsburgh, proof that he is one of the best of the best.