The Pittsburgh Steelers have responded to Stephon Tuitt’s retirement by falling back on what has been their off season mantra: Feed the hand that slaps you.

Larry Ogunjobi is no stranger to Steelers fans, Cleveland Browns drafted him in the 3rd round of the 2017 NFL Draft and he played for the Mistake by the Lake for four years. Following that he took a cruise down I-71 and sigened with the Cincinnati Bengals. 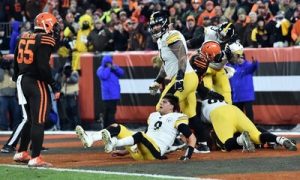 Larry Ogunjobi glares at Mason Rudolph after shoving him to the ground. Photo Credit:

Larry Ogunjobi 16 games for the Bengals in 2021, recording 7 sacks, 12 tackles for losses and 16 quarterback hits. Unfortunately, for Ogunjobi he injured his right foot in the Bengals playoff game against the Oakland er um Las Vegas Raiders and missed the rest of the post season.

In March he signed a three-year contract with the Chicago Bears worth a totaling $40.5 million and, if reports are correct, got $26.3 million guaranteed. However, when Ogunjobi failed a physical and Chicago withdrew their offer.

As Joe Rutter of the Pittsburgh Tribune-Review has pointed out, Larry Ogunjobi has more tackles against the Steelers than against any other teams.

But Steelers fans will undoubtedly remember him from the infamous 2019 “Body Bag Game” at Cleveland Stadium. Shortly after Myles Garrett assaulted Mason Rudolph, Larry Ogunjobi pushed Mason Rudolph to the ground. That action earned him a 1 game suspension, which was lenient given that he’d crossed the field of play to interject himself into a fight.

So like fellow new defenders Genard Avery,  Myles Jack and Levi Wallace, the Steelers signed yet another player who has caused Pittsburgh pain in the past (at least Avery Jack and Wallace did so legally….)

Isaiahh Loudermilk quest for playing time just got more complicated and Montravius Adams’ lease on a roster spot just got looser. As for Henry Mondeaux, Carlos Davis and Khalil Davis? None of those men would would be wise to sign long-term leases in the greater Pittsburgh area.

Third round pick DeMarvin Leal remains a lock to make the team, but if he wants to get a helmet, he’d better bone up on his special teams.