Becoming a sports fan for the first time is like falling in love harder than you’ve ever fallen before: One minute, you’re going about your business.

A little deep for a Steelers site, I know, and I’m pretty sure I owe royalties for stealing a line from the movie, Hitch, but that basically describes how my young life was before I became a diehard fan of the Pittsburgh Steelers.

The first game I remember being totally invested in so much so that I would have cried had the Black and Gold lost was Super Bowl XIV when Pittsburgh, a budding dynasty that had just won three Lombardi trophies over the previous five seasons, took on the Rams at the Rose Bowl on January 20, 1980. It was an exciting game filled with many big plays and dramatic moments. The Steelers survived, 31-19, to claim their fourth Super Bowl title in six seasons.

Almost one year to the day earlier, however, on January 21, 1979, when the Steelers outlasted the Cowboys, 35-31, before a packed Orange Bowl in Miami, Florida, I could have given a bleep. 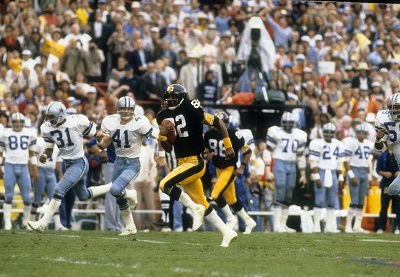 Super Bowl XIII: John Stallworth is headed to the end zone. Benny Barnes and Charlie Waters can only look on. Photo Credit: Focus on Sport/Getty Images via FanSided

I was months shy of my seventh birthday and only really cared about toys, commercials about toys, the Incredible Hulk TV series starring the iconic Bill Bixby, Sesame Street, Mister Rogers and many other things that didn’t have to do with sports.

In fact, when all the drama was taking place down in Miami between the Steelers and Cowboys, I was sitting in my living room in Bellvue, Pa. (a suburb right outside of Pittsburgh where my family was living at the time), watching a rerun of Tarzan, an old television series from the 1960s starring Ron Ely.

That’s right, as the two teams were locked in a struggle for the ages–as well as a struggle for NFL supremacy and the right to be called the team of the decade (and maybe the greatest dynasty in NFL history)–I was sitting around watching an old black-and-white TV series about a guy who had had it with civilization and decided to go live in a jungle and befriend a chimpanzee.

And when I say this Super Bowl was epic, and when I say the Cowboys could have laid claim to the title of “Greatest Dynasty Ever,” I do not make that claim without reason.

Dallas had been on a heckuva run, starting in the mid-’60s when it battled the mighty Packers for the right to go to the first two Super Bowls. The Cowboys lost to Green Bay in the NFL title game two years in a row, with the second one being dubbed “The Ice Bowl,” and in my mind, the most intriguing NFL game ever played.

The Cowboys lost in dramatic fashion a year earlier down in Dallas, but the way they lost this rematch at Lambeau Field, in minus-13 degree temperatures and to a Packers squad that was clearly on its last leg, could have caused this young franchise to wither away. But the Cowboys made it to Super Bowl V a few years later before losing in heartbreaking fashion to an inferior Colts team led by an aging Johnny Unitas.

The Cowboys finally got over the hump with a victory over an expansion Dolphins squad in Super Bowl VI. After coming close a year later and failing to make the playoffs in 1974, Dallas was back in Super Bowl X following one of the greatest drafts ever when 12 rookies made the squad in 1975. The Cowboys lost to Pittsburgh, 21-17, but by acquiring so much young talent in one draft, they had paved the way for their success to continue.

Dallas was again in the Super Bowl one year later and looking to defend its crown against a Steelers team that was back in the dance after missing out the previous two postseasons.

Just to recap, the Cowboys had reached the playoffs 12 times between 1966 and by the time they met Pittsburgh in Super Bowl XIII. They had played in several NFL/NFC titles games, were making their fifth Super Bowl appearance and were going for their third Lombardi trophy.

A victory over a Steelers team that had as many Super Bowl titles as the Cowboys, Packers and Dolphins–two–could have easily earned Dallas the title of “Greatest Dynasty Ever.”

I don’t want to do a play-by-play of Super Bowl XIII, but I will say that it included the greatest collection of talent in league history, as a combined 23 Future Hall of Famers were involved.

Super Bowl XIII was the most exciting game in the then brief history of an event that was quickly growing into the international phenomenon it is today. 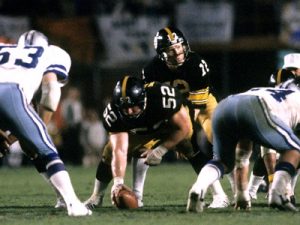 The Steelers jumped out to a 7-0 lead before Dallas countered with two touchdowns–one on offense and one on defense–in a matter of minutes. Pittsburgh quickly tied the game at 14 a few plays later when Terry Bradshaw connected with John Stallworth on a 75-yard touchdown catch and run.

The game simply had everything. There were the improbable hops shown by running back Rocky Bleier late in the first half that netted a touchdown and a 21-14 lead for the men in black. There was the drop at the goal line by Jackie Smith, a future Hall of Fame tight end who was coaxed out of retirement after many years with the St. Louis Cardinals, that prevented Dallas from tying the score late in the third quarter.

There was the controversial interference call against Dallas that set up the Franco Harris burst up the middle on third and 10 that made it 28-17 early in the fourth quarter. One play before Harris’s touchdown, the normally quiet running back got into the face of linebacker Hollywood Henderson after Henderson “sacked” Bradshaw on a dead-ball foul. Maybe Franco was a little miffed because Henderson said in the leadup to the game that Bradshaw was so dumb that he couldn’t spell “cat” if he was spotted the C and the A.

A squib kick on the ensuing kickoff was picked up by defensive lineman Randy White, who decided to shift the ball into the hand that had a cast on it. Fumble. Pittsburgh recovered and quickly took a commanding 35-17 lead on a strike from Bradshaw to Lynn Swann, who made a levitating leap in the back of the end zone to secure the laser beam.

But just when it looked like it was over, Roger Staubach, a legendary quarterback who had developed a reputation for the impossible comeback, started to do his thing. Next thing you know, it’s 35-31. Thankfully, Bleier secured the second onside kick by the Cowboys (Pittsburgh flubbed a previous one that allowed Dallas to truly get back in the game) with mere seconds left to give Pittsburgh relief and a third Lombardi.

I know I said that I didn’t want to do play-by-play, but I changed my mind to prove a point: All the action I just described was totally from my memory.

How could I do that? Because I’ve watched Super Bowl XIII countless times throughout my life. I’ve seen just about every NFL Film’s feature on it. I know the participants and even their individual feelings on the controversial plays that helped to shape this classic. I know everything about this game. It’s the Super Bowl the Steelers should be the proudest of, in my mind, because it came against the greatest team they ever played on that stage.

Yet, I didn’t care one bit when the game was actually going on.

As I said, love is a funny thing. As my sports soulmate was doing its thing down in Miami on January 21, 1979, there I was in Pittsburgh thinking that Tarzan was the only “Super” hero I would ever have eyes for.