The Pittsburgh Steelers defeated the Seattle Seahawks, 32-25, in the 2022 preseason opener at Acrisure Stadium on Saturday night. 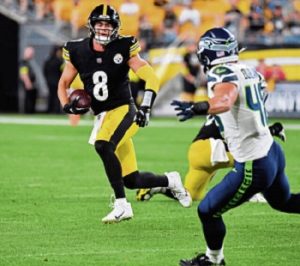 The end result wasn’t all that important. Teams win preseason games. Teams lose preseason games. At the end of the day, it has no bearing on what happens during the regular season–not usually, anyway.

However, Saturday’s events at Acrisure Stadium may just yet have a bearing on the Steelers’ 2022 regular season. Why? Because of who helped Pittsburgh win the game.

It wasn’t just anyone, mind you. No, this game was decided quite noticeably by many members of the Steelers 2022 draft class.

Fans and the media spend so much time analyzing and overanalyzing the draft–both pre and post–that it almost becomes mind-numbing. The reason for this is because so many of these draft choices–regardless of the round or position–go on to do nothing as NFL players.

That still might be the case for the Steelers 2022 draft class, but if Saturday’s events were any indication, maybe we can expect big things from these youngsters.

Let’s start off by talking about receiver George Pickens, a second-round pick out of Georgia who was the talk of Steelers training camp in the days before Saturday’s preseason opener vs. Seattle. It seemed that Pickens could do no wrong from the moment he set foot on the grass of Saint Vincent College in Latrobe, Pa. No matter the circumstance, no matter the route, no matter the defender covering him, Pickens was reportedly unstoppable over the first two weeks of training camp.

Here we are, just days after Pickens first professional football game, and he can still do no wrong. Sure, Pickens’s box score of three catches for 43 yards and a touchdown seems rather pedestrian, but did you see the touchdown–a 26-yard catch in the back right corner of the end zone? Yes, the pass was an absolute dime thrown by beleaguered quarterback Mason Rudolph, but the concentration Pickens displayed while making an over-the-shoulder catch and managing to keep both feet in bounds? Let’s just say that Antonio Brown, a former Steelers receiver who was not shy about referring to himself as Toe-Tap Tony for his ability to make such catches, wouldn’t have been able to do any better on his best day.

Speaking of catches, how about the ones made by Connor Heyward, a sixth-round pick out of Michigan State? At 5’11” (or 6′ depending on who’s doing the measuring) and 230 pounds, Heyward, the little brother of the legendary Cam Heyward, was brought to training camp as a tight end, this despite the fact that he had the body of an H-back/fullback. But in spite of his rather short stature for a tight end, Heyward displayed the kind of athleticism he was known for at MSU and extended his arms away from his body to pull in two passes for 24 yards on the night. He looked like an actual tight end, and not a lumbering fullback.

What about Mark Robinson, a former running back in college who converted to inside linebacker after transferring to Ole Miss as a senior and making the team as a walk-on? Robinson, a seventh-round pick in the 2022 NFL Draft, entered Saturday’s contest as your proverbial underdog fan-favorite. How did he do over the course of the evening? I’m afraid I lack the football IQ or keen eye to answer that question, but Robinson did catch my eye late in the game when he blitzed Seahawks quarterback Drew Lock and stripped him of the football. The Steelers recovered the fumble with just over a minute left in a game that was tied at 25.

And what did the offense do with this critical possession? It scored the game-winning touchdown with three seconds left. And just who orchestrated this drive? Kenny Pickett. That’s right, I had to save the best–or at least the most exciting–for last.

The Steelers selected Pickett, a University of Pittsburgh product who led the Panthers to the ACC Championship in 2021 and was a finalist for the Heisman Trophy, with the 20th pick in the 2022 NFL Draft.

That Pickett, the first quarterback taken off the board, lasted until the 20th choice was either divine intervention or an indictment of the ’22 class of passers, depending on your perspective. However, there was no question about the significance of the Steelers using a first-round pick to draft a quarterback just months after Ben Roethlisberger retired after 18 years.

The anticipation was almost palpable as Pickett finally made his debut in the third quarter of Saturday’s contest. Pickett was immediately met with the sounds of “Kenny! Kenny! Kenny!” by the folks in attendance, a chant that went on unabated the entire second half.

Pickett’s debut was everything a Steelers fan could have dreamed of. He completed 13 of 15 passes–including his first 11–for 95 yards and two touchdowns. Pickett’s final pass was a quick hitter to the right side that receiver Tyler Vaughns took the rest of the way for the aforementioned game-winning score.

The fans continued to chant Pickett’s name. His teammates all swarmed the field to congratulate him.

It was a magical evening.

And lest we forget about defensive lineman DeMarvin Leal, who did some good things in his professional debut. Speaking of debuts, we have yet to see receiver Calvin Austin III make his NFL debut. He missed Saturday’s game due to injury, but don’t you just feel like he’ll do some wonderful things when he eventually plays?

It’s hard to imagine a better overall debut for a Steelers draft class.

Is this group for real? I don’t know, but I can’t wait for the second act this Saturday night against the Jaguars.