The Steelers returned to St. Vincents, in Latrobe on Tuesday, July 26th after a 2 year thanks to COVID-19. And took just 24 hours and less than one picture on my Whats App to bring home the beauty and bliss that is summer at St. Vincents. 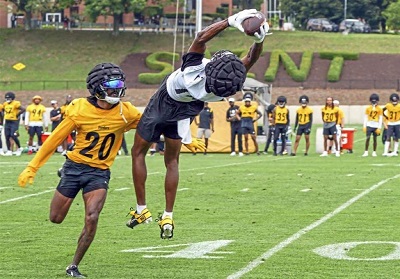 When the Pittsburgh Steelers drafted George Pickens in the 2nd round of the 2022 NFL Draft, friends who know a lot more about X’s and O’s than I do were excited. A quick look at his college record revealed why. This kid had talent, and were it not for an injury, he’d surely have gone early in the 1st round.

And this first photo from training camp makes it easy to see why:

In a single shot you have the beauty of training camp.

Sure, as Jim Wexell pointed out, it was only, “a lazy, looping “bomb” by Trubisky that Cam Sutton allowed George Pickens to catch as he was falling down.” But you know what? It matters not. And that’s the bliss of training camp.

Art Rooney Sr. once lamented to a reporter that, “Everyone’s a winner on draft day.” The Chief was right. The draft is about potential. St. Vincent is about seeing how can prove their potential.

Every summer is filled with these moments like George Pickens catch. Some of these go on to earn their rightful spot in Steelers lore, such as Joe Greene dominating in the Oklahoma Drill as soon as he arrived at St. Vincents or Ben Roethlisberger making an “a memorable rollout, throwback, 40-yard laser to Zamir Cobb” that caught Bill Cowher’s attention and brought Big Ben 1 step closer to Tommy Maddox on the depth chart.

Others, fade into obscurity. During my first year in Buenos Aires prior to the Steelers 2001 season I remember excitedly read Bob Labriola’s account in the Steelers Digest Kendrell Bell stopping Jerome Bettis at the goal line with a hit so resounding that it echoed off the hills which surround Chuck Noll field.

No one remembers that now because today Jerome Bettis is in the NFL Hall of Fame, while Kendrell Bell is a One Year Wonder Steelers rookie of the year.

But that one photo of George Pickens is proof that the journey has begun.