Preseason football isn’t what it used to be. (Or perhaps, as staff writer Tony Defeo suggested on BTSC, perhaps the good ole days of preseason weren’t all that good.)

Be that as it may, preseason football gives unproven players a chance to test their mettle in live fire circumstances. It gives coaches a evaluate unit cohesion. And, best of all, it gives fans a chance to evaluate young player with their own eyes.

With that in mind, here are 6 observations from the Steelers 16-15 win over the Jacksonville Jaguars. 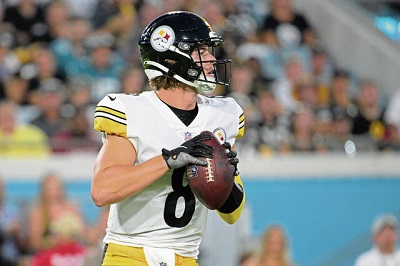 OK. Let’s be crystal clear on this: 2 preseason games does not a Hall of Fame resume make. Remember Matthew Thomas, the Steelers 2018 preseason standout? His NFL career consisted of 4 defensive snaps.

His debut against the Seahawks was nice, but it is easy to see that as a varsity first round pick dominating JV competition. But against the Jaguars, Pickett was going up against NFL veterans.

For the second time in two weeks, he took the reigns in a 2 minute situation and calmly went down the field. When asked about it, Mike Tomlin suggested that “…its probably who he is” before concluding “Some things people are born with.”

Leading touchdowns in the 2 minute drill against the Jaguars and Seahawks in August isn’t quite the same as doing on the road it against the Cincinnati Bengals or Baltimore Ravens in the 4th quarter of a rainy December night with the AFC North on the line, but we can now dare to dream.

2. Trubisky’s Mobility Will Be far More than a “Nice to Have”

So several times last season as it became clear that Ben Roethlisberger was about to ride into the sunset, Mike Tomlin mused about the importance of having a mobile quarterback, although it was clear he was thinking more along the lines of Steve Young than Kordell Stewart.

More than once, he slid his way out of pressure and delivered the ball down field to connect with Diontae Johnson and Chase Claypool. 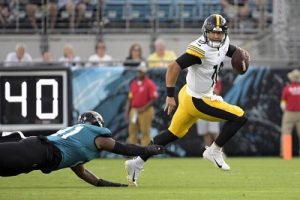 Mitch Trubisky shows off his mobility against the Jaguars. Photo Credit: AP, via Tribune-Review

Its good that he has that mobility, because he’s gonna need it….

3. The Time to Worry about the Offensive Line Begins Now

…Throughout training camp, veteran beat reporters such as Jim Wexell and Mark Kaboly have warned their readers that the Steelers offensive line has been shaky. It is hard to know what that really means, even if the Steelers remain one of the few NFL teams to have live hitting during training camp.

The line’s decline began in 2019, became obvious in 2020 and accelerated in 2021. The conventional wisdom was that with the maturation of Dan Moore and Kendrick Green, and the free agent additions of Mason Cole and James Daniels, the Steelers offensive line couldn’t get any worse. Could it?

The performance against the Jaguars suggests that the Steelers offensive line IS capable of regressing even further in 2022.

4. Gunner’s Good, But Watch Those Fumbles

There’s a lot to like about Gunner Olszewski. When the Steelers signed him, it almost seemed like a steal when comparing his contract to what the 49ers had given Ray-Ray McCloud. Everything we’ve seen or heard since then has been a positive, with all signs indicating he can be a good return man and a viable 4th wide receiver on game day.

But, as suggested here when he signed with the Steelers, perhaps the Patriots parted ways with Olszewski because of his ball security aka fumbling issues.

After making a really smart kick return, Gunner Olszewski fumbled the ball in the 4th quarter, allowing Jacksonville to take the lead. That’s easy to forgive in preseason. When the games count? Not so much.

5. Time to Stop Beating around the Bush

As criticism of Devin Bush mounted last fall, Steel Curtain Rising urged restraint. ACL injuries were tricky things to come back from, reminding everyone that Rod Woodson, who tore his ACL in the 1995 Steelers opener himself admits he didn’t feel 100% until 1998. The Dr. de Acero wrote his own medical opinion in Spanish talking about the complexities of ACL rehab.

I don’t pretend to have the savvy to do an X’s and O’s analysis of Devin Bush’s role in what was a very shaky run defense. But one image stands out is that of Bush getting turned so that he’s facing backwards as a running is cutting through to the second level behind him.

I’m pretty sure that’s not how Brian Flores and Jerry Olsavsky had Bush’s responsibilities for that play drawn up. When asked earlier this week if this was his “Make or break” year in the NFL, Bush offered sanguine words. Talk is cheap.

It is now time for Bush to put up or shut up.

As I did last year, I opted not to watch the game live and instead watch it via NFL Game Pass’ condensed viewing option, which not only cuts out commercials, but also pauses between plays with very view replays.

While that sure beats slogging through 3 hours’ worth of commercial breaks, you really do miss something watching games in such condensed fashion. Not only do you lose the flavor of the game, it is also hard to hone in on its ebb and flow.