Last year, Ben Roethlisberger played his final regular season game on the road, against the Ravens, just where he played the first one. On Sunday September 11th 2022, the Steelers Mitch Trubisky will begin in Cincinnati, exactly where the Ben Roethlisberger’s ended or at least where his Super Bowl window closed. 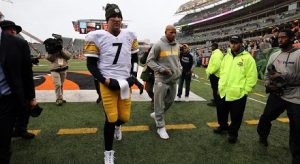 The Pittsburgh Steelers beat the Dallas Cowboys in Super Bowl XIII. The Steelers returned for their 4th Lombardi in Super Bowl XIV a year later against the Rams, while the Cowboys lost in the NFC Divisional playoffs. Yet Tom Landry and Danny White had The ‘Boys back in the NFC Championship for 3 straight years. It seemed only a question of “When” Tom Landry would win his third ring, not one of “If.”

In contrast, the Steelers 2nd Super Bowl Era end the moment Ryan Shazier turned over on the turf unable to move his legs at Paul Brown Stadium (yes, I know its Paycor now) back on that dark December night in 2017. The Kevin Colbert, Mike Tomlin and especially Ben Roethlisberger himself tried to move heaven and earth to re-open that window.

And in trying to replace the irreplaceable the Steelers quite likely gave up too much, in the form of the Devin Bush and even Joe Schobert trades.

And Cincinnati adds its weight to that historical rhyme scheme in other ways. For it was in Cincinnati in 2019 that Mike Tomlin benched Mason Rudolph for Delvin Hodges — reminding everyone of just how difficulty it was going to be to replace Ben Roethlisberger. A year later at Paul Brown, Ben Roethlisberger gave his own reminder, authoring a first half of football that drove this scribe to wonder out loud if Steelers Nation hadn’t just witnessed its own Ali-Holmes moment.

Fortunately, that was not the case. Roethlisberger rebounded, playing better football the next Sunday and for the next season as well. Yet, if there was any one game that symbolized just how far the Steelers had fallen, it was the 2021 beating the Steelers suffered in their final game at the venue that was to be known as Paul Brown Stadium.

Will Trubsiky earn his own Super Bowl rings? Will he follow in the footsteps of Cliff Stoudt, who ushered in an era of mediocre, bad, average and above average quarterbacks? Or will he be like Tommy Maddox, serving as a bridge quarterback to a long and successful Kenny Pickett era?

No one knows at this moment. But we’re about to start finding out.