The Pittsburgh Steelers launched the Mitch Tribisky era Sunday with a 23-20 overtime win over the Cincinnati Bengals at Paycor Stadium.

But an upset road win over a division rival and defending conference championship is always good. And the win confirmed a lot of what we thought we knew about these Pittsburgh Steelers, and that’s both good and bad. 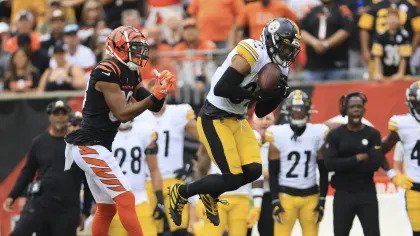 The old adage used to be, “Defense wins championships.” In this era of big gambling, Fantasy Football fueled football, the game has been legislated to tilt heavily towards the offense. Does defense still “win championships” in the National Football League?

Mike Tomlin and his players proved that defense can still win games for the Pittsburgh Steelers here in 2022. And they did this from the very beginning of the game.

Cam Heyward opened up the game, rag dolling Joe Burrow with a 5 yard sack. Minka Fitzpatrick struck next with a 31 yard pick six. Less that three and a half minutes had elapsed, the Steelers offense had punted once after earning just 8 yards. 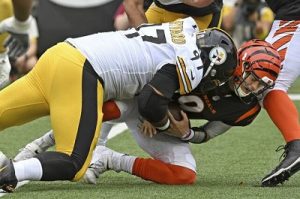 Alex Highsmith struck next, sacking Burrow for a 7-yard loss on third down, although a record setting 59 yard field goal by Evan McPherson got Cincinnati on the board. Highsmith wasn’t done, because four plays later he strip sacked Burrow with Cam Heyward recovering. Pat Freiermuth did his part with a 31 yard reception.  But the Steelers offense sputtered at the goal line, settling for a Chris Boswell field goal.

Not that it really mattered, because T.J. Watt picked off Joe Burrow 8 plays later. This time Zach Gentry did the honors of getting the Steelers in position to score, and Najee Harris finally found the end zone on the team’s 5th shot from the goal line.

Lovers of defense only needed to wait for six more plays for Cam Sutton to short-circuit another promising Bengals drive with an interception.

And that was only the first half. In the second half Ahkello Witherspoon intercepted Burrow again while Arthur Maulet sacked him in overtime forcing a final punt. T.J. Watt and Robert Spillane added sacks of their own, Myles Jack stepping up with a critical pass defense, as did Cam Sutton in the end zone.

After the game, this was the word from Cincinnati:

Been sitting as his locker staring forward since the game ended. #Bengals

His only brief break was a quick press conference.

If the Steelers defense played as well as optimist felt it could, their offense played as poorly as pessimists (or realists) feared it would. Here’s some harsh reality: Only 2 critical Cincinnati special teams errors separated the Steelers from losing a game in which they enjoyed a 5 point turnover differential.

And the worst part about it? The Steelers offense wasn’t trying to lose the game, they were trying their best. And their best almost wasn’t good enough. Sure, both tight ends came up with big catches in the first half with Pat Freiermuth adding another in overtime.

Diontae Johnson set up what should have been the game winning field goal in overtime with what was perhaps his best catch as a Steeler.

But Steelers running backs managed 2.3 yards per carry behind an offensive line that had ZERO push. And Pressley Harvin punted 8 times. Mitch Trubisky made a few nice throws and his mobility limited his sack total to one.

But the Steelers offense was just as in effective as it has been since early 2020, scoring only 2 field goals without the help of turnovers. 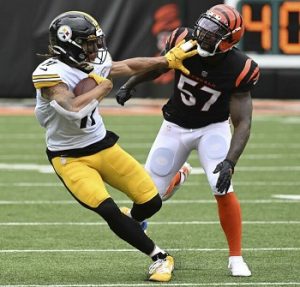 The Difference – Special Teams and the Run Defense

And the one field goal the Steelers did score was set up in part by Gunner Olszewski 20 yard punt return. The Steelers special teams also blocked an extra point and the Bengals missed a field goal in overtime. That’s four points special teams kept off the board and three more that they added. Subtract Boswell’s miss, and you still have a 1 point differential.

Last year Joe Mixon embarrassed the Steelers, averaging 5.5 yards per carry against them, and making it look easy. That success loosened the defense and allowed Burrow to abuse the Steelers secondary at will.

Today the Steelers held him to 3.0 yards on 27 carries, and if you take out the one, ugly 31 yarder that the Steelers defense did allow, that average drops to almost 2 yards a carry.

Running the ball might be passé in today’s NFL, I’d argue it is not, but even if I’m wrong, being unable to stop the run is positively lethal. The Steelers defense stopped the run, giving their play makers a chance to do their damage, and that was the difference.

Keeping It in Perspective

This win, in all its ugliness, came with a cost. T.J. Watt is rumored to have torn a pec. If that’s true, he’s done for the year, and the Steelers defense will become decidedly mortal. Najee Harris reportedly left the stadium in a walking boot. Levi Wallace and Robert Spillane also left the game with injuries.

But if that’s true, its also true that the Pittsburgh Steelers played their first game without Ben Roethlisberger demonstrating the same resilience that defined the Roethlisberger Era.