Taken from the grade book of a teacher who is dismayed to see his students revert to the poor study habits that doomed them last year, here is the Steelers Report Card for the 2022 home opening loss to the Patriots. 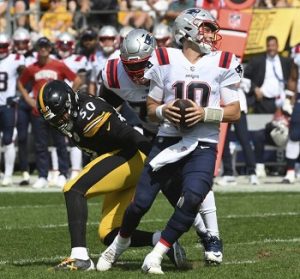 Quarterback
Mitch Trubisky looked more comfortable back there, the Steelers improved on third down, and he was sharp at the goal line. But his decision making was poor, on the interception and on other critical throws as he continues to force the ball while other receivers are open. Worse yet, the Steelers went 3 and out twice late in the 4th quarter. Grade: D

Running Backs
The Steelers lead running backs averaged 3.8 and 3.3 yards per carry. Pedestrian numbers to be sure, but a step in the right direction. Jaylen Warren looked good in his series and Derek Watt converted a 3rd and 1 with a 2 yard carry. Grade: C

Tight Ends
Pat Freiermuth only had 4 catches but one of those was for a touchdown. Zach Gentry didn’t have pass thrown his way. Grade: C

Offensive Line
The Patriots sacked Tribuisky 3 times and hit him two other times, but he generally had time to throw. There were also signs of life in the run blocking game. This unit has a long way to go, but it showed improvement. Grade: C-

Defensive Line
Mac Jones had all day to throw. Worse yet, the Patriots ran at will in the 4th quarter when they had to kill the clock. That was eerily reminiscent of 2021. Grade: D

Linebackers
The Steelers saw what life without T.J. Watt looked like, and this unit will have to step up. Alex Highsmith got a QB hit in on Mac Jones, as did Malik Reed. Robert Spillane led the unit in tackles. Grade: D

Secondary
Minkah Fitzpatrick’s interception essentially erased Mitch Tribuisky’s own. Cam Sutton dropped an interception which indirectly set up the muffed punt. Beyond that, the Patriots moved the ball far too easily during their first half 2 minute drill and that touchdown came back to haunt the Steelers. Grade: D+

Special Teams
Chris Boswell went 2-2 on Field Goals of 26 and 52 yards. Boomed off punts for a 51.8 yard average. Those were good. But New England logged several good kick returns as well as one nice punt return. Gunner Olszewski muffed a punt that set up New England’s 2nd half touchdown. This was a special teams error in a game where the Steelers could ill afford one. Grade: F

Coaching
It would be hard to call Matt Canada’s offense a success – and we won’t do that here. But we will acknowledge that the Steelers showed some improvement on third down and there were signs, if however faint, of life from the running game.

Nor will you win many games when you’re 3 points behind in the 4th quarter, your defense forces 2 punts, and all you can muster is 2 three and outs.

If the offense took/may have taken an infants crawl forward, the Steelers defense took a giant “Mother May I” step backwards. Without T.J. Watt the Steelers generated precisely zero pass rush. Worse yet, with the game on the line the Patriots offense rushed the ball at will, advancing down the field and killing the clock.

Did Bill Belichick see some sort of systematic weakness he could exploit? Or did the Steelers simply lose a series of 1-1 battles?

Unsung Hero Award
He didn’t have the kind of game that will make fantasy football owners happy. Nor did he make any of those spectacular plays that fall off of fantasy football owner’s radars. But he scrapped and scraped and managed to make piles forward, giving the Steelers running game some semblance of life, and for that Najee Harris wins the Unsung Hero Award for the 2022 opening day loss to the Patriots.