When Mike Tomlin’s Pittsburgh Steelers welcome Bill Belichick’s New England Patriots tomorrow at Acrisure Stadium tomorrow it will mark the first Steelers-Pats contest since 1998 without Tom Brady and/or Ben Roethlisberger. 1998. We’ll get to what this means for the coaches in a minute. 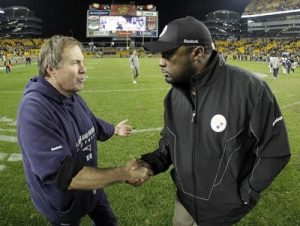 Mike Tomlin and Bill Belichick at the then Heinz Field in 2010. Photo Credit: Eagle Tribune.

While that 1998 Steelers squad did feature rookies  like Hines Ward and Alan Faneca who saw action in the Tomlin-era Steelers-Patriots series, it also had players like Dermontti Dawson and Carnell Lake – who were drafted by Chuck Noll.

But this isn’t a nostalgia piece about Steelers history vs. the Patriots, as we’ve already covered that in detail, but rather one about the interplay between team, individual, and coaching records.

Of Quarterbacks, Records, Rivals and Coaches

As sports fans, we love to talk about So-and-So’s record against Such-and-Such. Numbers don’t lie and sometimes the picture they a cut and dried picture. Tom Brady owned the Pittsburgh Steelers.

Those wins were sweet! But if Steelers fans are to take off their Black and Gold tinted glasses, they’ll see that those wins tell us law of averages than about the completive balance between the two teams.

If you dig a little deeper, you could perhaps say that as legitimate franchise quarterback Ben Roethlisberger gave the Steelers had a chance against the GOAT. With Kordell Stewart? Not so much. But what about the coaches? 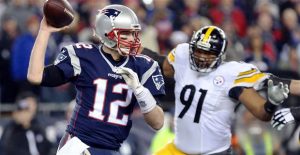 Those with short memories are likely to conclude that the record proves that Bill Belichick is also better the Bill Cowher and Mike Tomlin, because he’s shared in Brady’s success against the Steelers.

The one time, in 2008, when Bill Belichick bring Tom Brady to his fight against Mike Tomlin, the Steelers creamed him. In contrast, the onetime Mike Tomlin faced off against Billy Belichick with Landry Jones as his standard bearer, Jones kept the Patriots honest until the Steelers got Gronked.

So just how much could you, or should you untether a coach’s ability from the performance of his franchise quarterback? That’s a hard question to answer. Chuck Noll and Mark Malone  beat Bill Walsh and Joe Montana. Twice.

No one in their right minds would argue that those outcomes suggest that Mark Malone was a better quarterback than Joe Montana. It’s hard to even write that denial without snickering.

Yet, on the flip side, I unhesitatingly use the 1984 Steelers and 1987 Steelers wins over the 49ers as proof that, in terms of pure coaching ability Chuck Noll was at least the equal of not the superior of Bill Walsh (heck with that, Noll was the better than Walsh! To show that I’m not biased, I’ll also cite Joe Gibbs’ 3-0 record over Noll as proof of Gibbs’ superiority.)

That’s right ladies and gentleman. Remember this for Final Jeopardy:

The Answer – “He’s the Pittsburgh Steelers quarterback with a perfect record against Bill Belichick.”
The Question – “Who is Bubby Brister?”

Bubster led the Steelers to victory over Bill Belichick’s Browns Chuck Noll’s final game in 1991, and then for an encore closed Bill Cowher’s ’92 Steelers season by quarterbacking Steelers to another win over Cleveland.

Brister, like Brady, Ben and Bill Cowher, is long gone, giving way to Mike Tomlin and Mitch Trubisky vs.Billy Belichick and  Mac Jones. For the record, going into this game Mike Tomlin is 3-7 against Belichick.

Will this downgrading of quarterbacks for both coaches give us a chance to truly gauged one coach’s talent against the other’s?

But if the T.J. Wattless, crappy offensive line Steelers do beat the Patriots tomorrow, you’d better believe this scribe is gonna say its offers evidence that Tomlin is a better coach than Belichick.