From the grade book of a tardy teacher who nonetheless sees signs of progress in his students miserable performance here is the Steelers Report Card for the Sunday Night Football loss to the Miami Dolphins. 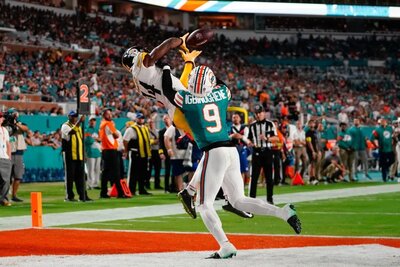 Quarterback
In his second full start, Kenny Pickett did some nice things, leading a touchdown drive and putting the team in position to win late in the game, twice. Still, third down conversion was abysmal and the interceptions lethal.  Grade: D

Running Backs
Najee Harris is improving, but still isn’t delivering the production on first and second downs that the team needs. Jaylen Warren converted another third down and was an asset in his passing game. Running back were OK. But the Steelers offense needs more. Grade: C-

Tight Ends
Pat Freiermuth was a bright spot on offense, catching 8 of 9 balls thrown to him for 75 yards. Zach Gentry caught both passes thrown his way but lost yards on one first down attempt. Worse yet a non-block on another questionable call led to another first down that lost yardage. These errors weren’t that consequential, but they are examples of how small mistakes are killing this offense. Grade: C

Wide Receivers
Rookie George Pickens led the group with six catches on six tries with an incredible touchdown. Diontae Johnson had 5 catches on 10 targets but a miscommunication contributed to the last interception. Chase Claypool had 5 catches on 8 yards. Grade: C

Offensive Line
Kenny Pickett was sacked twice and hit six more times. Running backs had a little more room to run, and the team converted on four down twice. The offensive line IS improving. But still has a ways to go. Grade: C-

Defensive Line
Cam Heyward and Larry Ogunjobi both came up big in short yardage situations again, and had the game ended differently, those could have been the plays of the game. Still, Raheem Mostert had some success running the ball and Tagovailoa went untouched the entire night. Grade: B-

Linebackers
Myles Jack was all over the field and is emerging as a true team leader. This unit contributed as much as any to the 2nd half shut out. Still, no one got to Tagoviloa save for one hit by Malik Reed. Grade: B

Secondary
Yes, Levi Wallace, Terrell Edmunds and Cam Sutton let interceptions slip through their fingers. Any one of those could have been the difference in this game. Still, the unit contained Tyreek Hill while Miami went 4-14 on third downs, as the Steelers defense pitched a 2nd half shutout without a pass rush. Grade: B

Special Teams
Chris Boswell was perfect on his kicks, Gunner Olszewski had one nice punt return and kept the ball in his hands. Punt coverage was strong, kick coverage OK. Pressley Harvin was wildly inconsistent. His short punts alone were hardly a difference maker, but serve as yet another example of how the team can position itself to win by eliminating small mistakes. Grade: B- 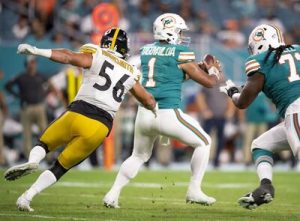 Coaching
Matt Canada is taking a lot of heat in Steelers Nation this week.

When your offense is near the bottom of every major statistical category and scoring a second touchdown would be considered an “improvement” that comes with the territory. Still, how much is really on the play calling and not the execution? Canada didn’t commit those penalties that preceded Pickett’s interception – nor did he throw that pick.

This isn’t to defend Canada per se, but it should dispel the idea that summarily firing him would provide Pittsburgh with a panacea.

One defense Teryl Austin and Brian Flores quickly adjusted to Miami’s offense and forced them to settle for 3 points 3 times, before shutting them out completely in the second half.

You are your record. The Steelers are 2-5. That’s not good. So be it. Mike Tomlin’s players contested every blade of grass to the bitter end. Will they keep that up down the stretch? IF they do, will effort translate into victories? I don’t know.

Unsung Hero Award
People have been down on him for a while. Some of it is warranted, some of it perhaps not. Against the Dolphins he batted a pass away, made a tackle for a loss, and a logged touchdown saving stop on a bootleg and for that Devin Bush wins the Unsung Hero Award for the Sunday Night Football loss to the Dolphins.