The Pittsburgh Steelers lost 35-13 to the Philadelphia Eagles, extending their losing streak in the City of Brotherly Love to 10 games and 57 years.

When asked about his latest loss, Mike Tomlin cited Pittsburgh’s penchant for penalties, explaining that at times it was “Steelers vs. Steelers.” While conceding with respect Jalen Hurts 4 touchdown performance, Tomlin added “They were making those plays and we did not.”

You can slice and dice the loss to the Eagles in a number of ways, but it all boils down to one painful reality: The Eagles are an elite football team; the Steelers are not.

Still, with the Steelers sitting at a 2-6 record going into the bye week, it is fair to ask, “Are there positives Pittsburgh can pull out of this game?” Perhaps, but only if you keep the proper perspective. 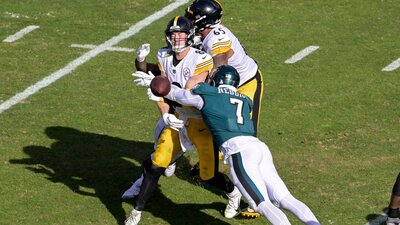 Three weeks ago the Steelers traveled to Buffalo and Josh Allen and the Bills hung 38 points on the Steelers defense in a game that was over by half time.

The Steelers defense answered by making Tom Brady look mortal, and then hung with Miami by effectively neutralizing Tua Tagovailoa, Jaylen Waddle and Tyreek Hill’s fast-track offense for 3 quarters. The defense the Steelers a chance to win against Miami. 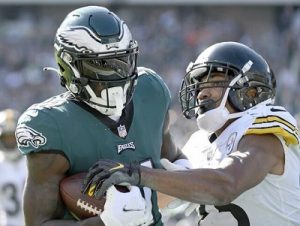 So it was fair to ask, “Could the Steelers T.J. Wattless defense carry the team while Kenny Pickett and the offense found its footing?”

The answer revealed against the Eagles, and was a resounding, “No.”

To requote Mike Tomlin, “They were making those plays and we did not.” Yes, the Steelers defense did do some nice things. Cam Heyward, Malik Reed and Carlos Davis came up with sacks which helped scuttle a few drives.

But the Steelers defense only really got to Hurts one other time. Terrell Edmunds broke up another would be touchdown pass and James Pierre helped contain Brown. But that was really just window dressing.

Eagles running back Miles Sanders also caught them with their pants down late in the game, when, theoretically, a score and a stop could have put Pittsburgh back in the game. The Steelers defense couldn’t deliver.

It was not to be.

When a team scores 4 touchdowns on you without sniffing the Red Zone, you’re getting burned plain and simple.

Kenny Pickett had a rough day. The Eagles pass rush got better as the game wore on as Pickett was sacked six times, including a strip sack. Overall he was hit 11 times.

Their 9 minute time of possession advantage would seem to suggest that its ball control, but for a ball control offense to work, you must to score. And the Steelers only managed to score 13 points, their lone touchdown coming on a trick play: A Chase Claypool pass to Derek Watt.

The Steelers did try to air it out more, but as George Pickens experience showed, they just couldn’t come down with the ball in bounds. Najee Harris and Jaylen Warren both logged a few nice runs today, but unless they were running draw plays, they got bottled up at the line of scrimmage.

Scoring 13 points against an elite defense is better than being limited to 3 points as they were against the Bills, but clearly this unit isn’t getting it done.

One has to dig hard to find reasons for hope after a loss like this.

If the Steelers 1 and 12 is as abysmal as it is – and it is – they were also 4-4 on fourth down attempts, including a fake punt that saw Marcus Allen gain 4 yards. Two of those 4th down conversions came on the Steelers lone 2nd half scoring drive.

Chase Claypool, Najee Harris and Jaylen Warren all fought and earned extra yards late in the game when hope was spare.

Gunner Olszewski also showed similar moxie when he tried to pick up a downed punt. One might question the wisdom of such a risky play, but you’ve got to admire his spirit. Likewise, working as both a returner and a receiver Steven Sims showed the he could perhaps develop into a weapon.

Time will tell. But for now the Steelers are 2-6, and the loss to the Eagles shows just how deep the hole is that they must dig themselves out of.