“Ron Jaworski? You never have to worry about me jerking you.” – Dick Vermeil, in a 1970’s NFL Films segment.

My introduction to the concept of “bench the quarterback” came on a random 1970’s Saturday afternoon while watching that NFL Films piece. My reaction? I asked my older brother – who while not knowing everything the way my father did, knew quite a lot – “What does ‘Jerking you’ mean?” “He means taking you out for another quarterback,” my he explained. 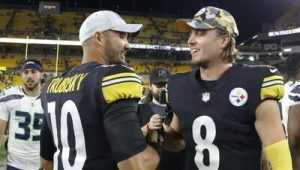 At my tender age, the concept wasn’t just abstract, it was downright strange. In my elementary school eyes, Terry Bradshaw was, had always been and always would be the quarterback of the Pittsburgh Steelers.

Ah, the innocence of youth.

I’m sure that a social media listening platform would reveal “Bench the quarterback” running neck-in-neck with “Fire the coach” for the two most popular phrases on Sunday afternoons.

Choosing a starting quarterback is the most consequential decision an NFL head coach makes. Having a “difficult choice” isn’t always a “good problem to have.”

Thanks to Kenny Pickett’s concussion Mike Tomlin had to make his 2nd quarterback change in three weeks. Mitch Trubisky came off the bench. He played without fear. He was exceptional, leading a touchdown drive and killing the clock with multiple 3rd down conversions.

Mike Tomlin threw cold water on that idea quickly, affirming that Kenny Pickett will play against the Miami Dolphins if he clears the concussion protocol.

Mitch Tribusky earned every bit of praise he’s getting for closing the Buccaneers game with a win. He was accurate with his arm, nimble on his feet. And he was decisive. 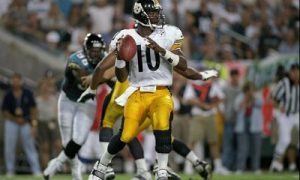 And maybe that’s the point. Maybe is one of those quarterbacks who is better coming in off the bench. That may sound oxymoronic, but it is not unprecedented. Think of Kordell Stewart.

In the game he entered after Tommy Maddox’s spinal contusion, Stewart earned a passer rating of 135.2 while throwing 17 passes. The next week he notched a 117.3 rating.

While I can’t prove it, this lends credibility to the notion that Kordell played best as a backup, or at least without the the pressure of being a starter.

Be that as it may, the counter argument would run, Tribusky has the proverbial “hot hand,” so the Steelers should stick with him. Had the off season seen the Steelers depth chart evolve differently and say, had Tomlin benched Tribusky in favor of Mason Rudolph, and Rudolph had exited the game with a concussion then going with the hot hand might be a wise option.

But that’s not the situation.

Mike Tomlin left himself some wiggle room after the Jets game. He could have come back the following Tuesday and announced:

Regarding last Sunday’s game relative to this Sunday’s game at the quarterback position, last Sunday I was looking for a spark, so I turned to Kenny. I felt that by in large he provided us with that spark and did some good things. But this week, with the Buffalo Bills coming up, on the road, I’m looking for stability so, Mitch  Tribusky returns to his role as starter, where he will stay. Any questions.

No one would have thought anything of it.

He named Pickett his starter, and Pickett needs to know that Tomlin’s behind him. Switching back to Tribusky after just one strong quarter of football would send the opposite signal.