Thanksgiving 2022 has arrived, so as we’ve done every year since 2009, Steel Curtain Rising is naming its 2022 Steelers Thanksgiving Honors winner.

The Steelers had just dropped a very winnable game in overtime against Todd Haley’s Kansas City Chiefs. They’d just lost Ben Roethlisberger to a concussion. And Charlie Batch broke his wrist. Yet from the carnage of that ugly loss came a ray of hope.

Andy Studebaker had picked off a pass intended for Hines Ward. He was in his own end zone and had nothing but green in front of him. So he took off. He would have taken it the house, were it not for Rashard Mendenhall, picking himself off of the turf and coming from the complete opposite side to run 94 yards to bring him down.

If one can question the “what it” that Mendenhall displayed at other times during his Steelers career, no one can deny the heart he displayed on that play.

So Mendenhall earned our first Steelers Thanksgiving Honors, and it has been a tradition since.

This year’s honors begin with the brightest spot (thus far) of the otherwise disappointing Steelers 2022 season.

Tom Brady and the Tampa Bay Buccaneers had come to Pittsburgh. Kenny Pickett had driven the Steelers down the field and gotten them on the board with a touchdown pass to Najee Harris. But the Buccaneers had gotten a field goal, and as the second quarter opened, Brady had moved Tampa Bay 2nd and 1 on Pittsburgh’s 1 yard line.

Leonard Fournette, a man who has tortured the Steelers at Acrisure Stadium, got the call. He thought he had a hole behind the left guard. 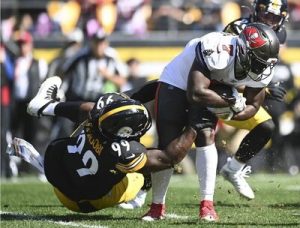 Now, you might be thinking, “Last year you used a similar example when bestowing Steelers Thanksgiving honors on Cam Heyward, you’re giving it to Cam again?” We’re not talking about Cameron Heyward. Yes, Cam tackled Forunette for a 5 yard loss on 3rd down, but someone else made the play on 2nd down.

And we are giving Steelers 2022 Thanksgiving Honors to Larry Ogunjobi precisely because last year Cam Heyward was the only Steelers defensive lineman capable of making those kinds of stops, and this year he has Ogunjobi to help him.

In that same game, Ogunjobi made several stops for little or no gain. And he’s done so throughout the rest of the year.

In 2021, the Pittsburgh Steelers run defense gave up an average of 5 yards per carry, and were the NFL’s worst run defense. The Steelers only saw 3 games were an opponent’s longest run was less than 20 yards. Opponents had long runs of over 40 yards in three games and long runs of over 30 yards in 3 more. Overall, the Steelers opponents’ longest run from scrimmage averaged at 26.5 yards.

Yet in 2022 the Steelers are writing a different story. This year they’re giving up 3.9 yards per carry and that 1.1 yard difference improves them to 5th in the NFL. The longest run they’ve given up is 36 yards, and the average longest run given up is 19.5 yards.

Even Cincinnati, who rushed on the Steelers at will in 2021, struggled to run the ball in an otherwise lopsided win over the Steelers in Pittsburgh. 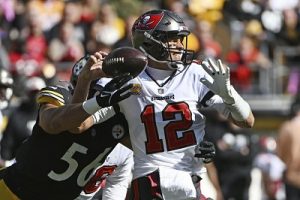 Absolutely not. And that’s the point. Improved play from Devin Bush and Montravius Adams, the arrival of Myles Jack, the maturation of Alex Highsmith and Robert Spillane and the return of Tyson Alualu are all critical to this improvement.

But none of those men would be able to do their jobs as well as they are doing them, were it not for Larry Ogunjobi making plays on his own, tying blockers up or taking advantage of double laid on Cam Heyward and T.J. Watt.

And he is. Most past honors have gone to up and comers, think Antonio Brown in 2011 or Ryan Shazier in 2016, or an established presence in the franchise such as Ben Roethlisberger in 2017 or Kevin Colbert in 2019.

In contrast, Ogunjobi is with the Steelers on a one-year “prove it” deal and could easily be playing somewhere other than Pittsburgh in 2023.

But that’s one of the lessons that comes with this year’s choice – sometimes its best to be thankful for what you’ve got, when you’ve got it.

As I “celebrate” my 21st Thanksgiving in Argentina, I’ll again express my hope that everyone reading this has reasons to be Thankful that go far beyond football.

So whether your spending Thanksgiving in Pittsburgh or welcoming friends and family from Pittsburgh as I did so often growing up and as a young adult or whether you’re just a Steelers fan with no ties to the Steel City, Steel Curtain Rising wishes you a very Happy Thanksgiving.