From the grade book of a teacher who can’t help but feel he just saw his students follow 1 step forward with 2 steps back, here is the Pittsburgh Steelers Report Card for the 2022 loss to the Bengals at Acrisure Stadium. 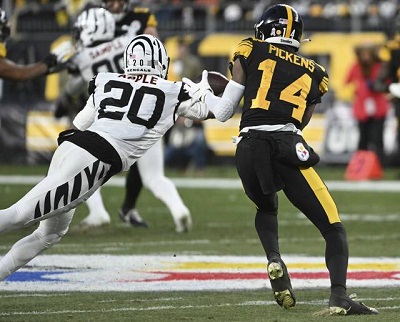 Quarterback
Kenny Pickett protected the ball and looked sharp enough on three first half scoring drives. But he was utterly ineffective in the second half, save for some garbage time glory. Grade: D

Running Backs
Najee Harris ran 20 times for 90 yards including a touchdown and added 4 catches for 26 yards. Jaylen Warren converted a third down with a 9 yard catch before leaving with a hamstring injury. Solid night from the running backs, but the Steelers needed a little more. Grade: B-

Tight Ends
Pat Freiermuth had 8 catches for 79 yards including a tough one over the middle. He also had a drop and a holding call on a drive that saw the Steelers reach 3 and 25. Zach Gentry had 2 catches for 8 yards and frankly doesn’t look as promising as a number 2 tight end as he did a year ago. Grade: C

Wide Receivers
George Pickens had 4 catches for 83 yards including a 33 yarder and a 24 yard touchdown. He also had a drop. Diontae Johnson had 4 catches for 21 yards and looked nothing like a number 1 wide out. He had 1 yard on a jet sweep. Steven Sims didn’t have a catch, and lost 3 yards on his reverse. Grade: C-

Offensive Line
Run blocking was OK and while Kenny Pickett was only sacked twice, the Bengals hit him seven times. Pickett has been taking too much punishment of late. Grade: D 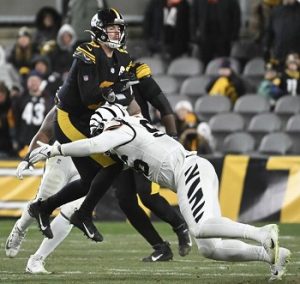 Defensive Line
The good news? The Steelers pretty much neutralized the Bengals running game. The bad news, Cincinnati didn’t need to run much. Cam Heyward had a sack and Montravius Adams had a nice stuff for a loss, but the Steelers needed more upfront. Grade: C-

Linebackers
T.J. Watt had half a sack, intercepted a pass and got his hands on two more. Alex Highsmith also had half a sack. Individually the stats of the rest of the linebacking crops look good, with Myles Jack leading the team in tackles, Devin Bush coming in second, and with Robert Spillane logging a tackle for a loss and a deflected pass. But Joe Burrow moved the ball with ease, often in the middle of the field and was untouched for too many series. The linebackers also came up short in the Red Zone. Grade: D

Secondary
The Bengals were only 3 for 9 on third down. That’s in large part because they had 18 passing first downs. Arthur Maulet led the unit in tackles and Levi Wallace had a nice interception, but Joe Burrow threw 4 touchdown passes and led 3 other scoring drives. Grade: F

Special Teams
Steven Simms muffed a punt that help pin the Steelers back. That must not continue. Simms however was effective as a kick returner. The Steelers kick coverage gave up a long return which set up a Bengals score. Pressley Harvin had a solid night punting, while Matthew Wright redeemed himself kicking 3 field goals and making all of his extra point attempts. Grade: B

Coaching
During the first half Matt Canada’s offense was effective, scoring two touchdowns and running an efficient 2 minute drill. The second half told a different tale as the Steelers offense punted 5 times, turned over on downs once and could only muster a measly field goal after a turnover.

To be fair to Canada, there were obvious execution errors – he didn’t commit the penalties to push the Steelers back to 3rd and 25.

Teryl Austin has a different problem. He’s got championship talent on his defense. His defense delivered several splash plays late in the 2nd half and during the 3rd quarter when they could have been difference makers.

But its too simplistic to say, “The defense did enough to win and didn’t get the help it needed from the offense.” The Bengals moved up and down the field with relative ease on all four of their touchdown drives. And the defense was horrendous in the Red Zone. 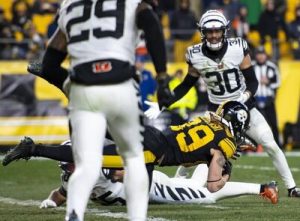 Against the Bengals, the Steelers showed they are capable of playing wining football against varsity opponents. Mike Tomlin must find a way to make that happen consistently. Grade: F

Unsung Hero Award
While it’s hard to laud garbage time glory as heroics, this player made a heads up catch on a batted ball at the goal line that set up a face-saving touchdown, and for that Gunner Olszewski wins the Unsung Hero Award for the Steelers 2022 loss to the Bengals at Acrisure Stadium.