IF the Pittsburgh Steelers 24-17 win over the Indianapolis Colts on Monday Night Football were to be titled as a Friends Episode, potential names for it might be:

All would make good choices. Hopefully, history will prove that Pickett’s first comeback to be the most relevant story line to come out of this game. But for my money the most appropriate Friendish title would be, “The One Where Backfield Depth Delivered Victory.” 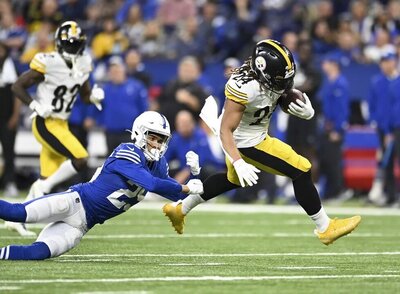 Steelers Return to Old School @ Running Back – For a Night

Generation X Steelers fans who grew up outside of the ‘Burgh often learned of Sunday’s results while reading Monday morning papers. Instead of watching highlights, we’d have to gleam our excitement for reading stats in box scores and then letting our imagination do the rest.*

When it came to running backs, you’d read names like Pollard, Jackson and Abercrombie week in and week out. Then, as the 80’s progressed those names were replaced by Hoge, Williams, Carter, Worley, and Foster.

That changed in the Cowher Era and continued into the Tomlin Era to the point where depth-chart neglect saw several Tomlin Teams hobbled by an injury to a single running back.

But Mike Tomlin and Matt Canada altered course in 2022, opting for a depth chart that was 3 backs deep – with another on the practice squad. 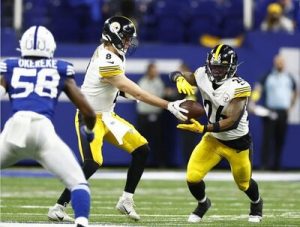 The Steelers entered the game without Jaylen Warren. Najee Harris got the nod to start the game. His average might not be impressive, but he ran well. But even before Harris got hurt, the Steelers worked in Anthony McFarland.

When Harris went out with an injury, Tomlin turned to Benny Snell and McFarland.

The results speak for themselves. Splitting carries the duo:

Where there times when both men were stopped in key situations for little or no gain? Yes. Can we say that “Benny Snell Football” with an assist from Anthony McFarland took over the game? No.

But, with Najee Harris out, would the Steelers have seen similar production from the 2020 equivalents of Fitzgerald Toussaint and Stevan Ridley?

I rest my case.

*This was actually quite fun, although I don’t expect you to believe me anymore than I believed my parents assurances that 1950’s Flash Gordon Serials were actually entertaining.

Almost nothing went right for the Indianapolis Colts in the first half. After Matthew Wright banged in a 25 yarder before half time, it appeared that the first thirty minutes would be a total loss for Jeff Saturday’s crew.

Matt Ryan went to work, and brought his team to the Steelers 3 yard line with veteran savvy. Indy, it appeared would get on the board before the half. Isaiahh Loudermilk had other ideas, and blocked the kick.

Ah, No. Dallis Flowers took the opening kickoff of the 2nd half and streaked through the Steelers defenders, returning it 89 yards. Four plays later Johnathan Taylor was scoring a touchdown, getting the Colts back in the game.

Given their star power on defense, is it fair to expect that the Steelers would have and should have dominated the Colts offense? Yes.

The fact that they continued to give up long gains and only did so-so against Jonathan Taylor offer reasons for concern. The fact that T.J. Watt, three games back from injury, is only playing OK but not dominating is also a concern.

But the defense made several critical plays: 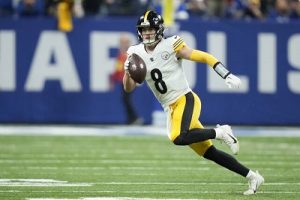 As acknowledged above, this game will rightfully be remembered as Kenny Pickett’s first comeback.

There are few things more demoralizing in football than leading for an entire game, only to see that lead slip away as the 4th quarter arrives. Yet that’s just the situation Kenny Pickett found himself in. And he met the challenge head on.

He completed five straight passes. OK, there was an ugly, yard losing one to Zach Gentry. But he made a critical throw on third down to George Pickens and he delivered a catchable touchdown strike to Diontae Johnson that got dropped. If Pickett’s throw to Johnson was slightly overthrown, he bought time with his legs and delivered a perfect ball to George Pickens on the 2-point conversion.

Pickens didn’t author a heroic 4th quarter comeback the way Ben Roethlisberger used to – with an effective running game to lean on he was more like an orchestrator than a field general – but Pickett rose to the occasion.

Hopefully, this will be the first of many times we can say that.