Taken from the grade book of a teacher pleased as punch to see his students go “Old School” here is the Pittsburgh Steelers Report Card for win over the Colts on Monday Night Football. 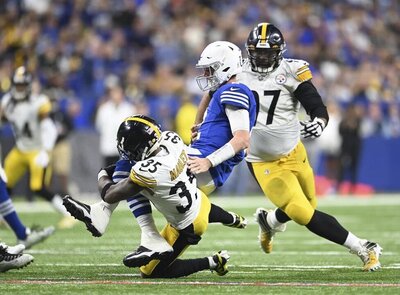 Quarterback
Kenny Pickett authored his first comeback win by going 20 of 28 for 174 yards and no interceptions. Pickett is making progress, but still needs to perform better on third downs and in the Red Zone. Grade: B+

Running Backs
Najee Harris was off to a solid start with 35 yards on 10 runs and a touchdown before getting hurt. Benny Snell stepped in and reminded everyone of why he was on the team with 62 yards on 12 carries and a touchdown. Anthony McFarland, looking like he belonged in the NFL for the first time, had 30 yards on six carries plus 2 catches for 11. Derek Watt converted a fourth down with a 4 yard run. Grade: A

Tight Ends
Pat Freiermuth had 3 catches for 39 yards while Zach Gentry had one catch for 4 yards. Grade: B

Wide Receivers
George Pickens made some nice catches and is developing a rapport with Pickett, but he still made some rookie mistakes. Diontae Johnson continues to disappoint. He had 5 catches but didn’t bring in a catchable ball in the end zone and ran backwards on a play where he could have gotten a first down. Steven Sims had 2 catches for 9 yards while Gunner Olszewski ran a reverse for 9. Grade: B-

Offensive Line
Kenny Pickett had better protection than he’s had of late, but still got sacked on a few critical third downs. But protection improved as the game wore on and The run blocking continues to improve. Grade: B

Defensive Line
Larry Ogunjobi led the team in tackles while Montravius Adams came in second with three with Cam Heyward getting three hits on Matt Ryan. The Steelers contained Jonathan Taylor well enough and that started with the line. Grade: B

Linebackers
Devin Bush led the unit in tackles and came up with a critical pass defense. Myles Jack came in second, and T.J. Watt had a quiet night, but did help deflect a pass. Alex Highsmith had the play of the night when he strip sacked Matt Ryan during the two minute drill, costing the Colts precious time. Grade: B

Secondary
James Pierre made an excellent interception to help set the tone for the night. Terrell Edmunds made a sack in the first quarter and Arthur Maulet logged one in the 4th. Outside of the pass he defensed Cam Sutton had a quiet night which was good for a cornerback. The Colts went 3-12 on third downs. Grade: B 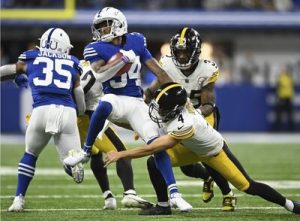 You know things are bad when the special teams section features a photo of a kicker making a tackle on a kick return that wasn’t the worst one of the night. Yet, that’s what happened. The Steelers gave up two a 45 yard return to Isaiah Rodgers that should have set up a score and an 89 yard one to Dallis Flowers that not only set up a score, but let Indianapolis.

Yes, the Steelers had a blocked field goal. Yes, Presley Harvin boomed off two punts of over 50 yards, the second of which pinned the Colts at the 7 to start their final drive. And Matthew Wright made all of his kicks. So that keeps this unit’s grade in passing territory. Barely. Grade: D

Coaching
While many if not most fans can’t or won’t see it, Matt Canada’s offense continues to improve. Yes, the Steelers still seldom pass deep, although it is clear there are down the field options. Yes, there are puzzling play calling decisions – such as the screen ton Gentry, but it is also clear that there are execution errors. And offensive penalties are down.

On defense Terryl Austin’s unit limited the Colts to on first half field goal and to two touchdowns in the second half. Is this unit dominating at the level one would expect it to given its star power? No, it isn’t.

The Steelers entered the game 3-7. But if you look at the intensity that reserves Anthony McFarland and Benny Snell played with, you’d have thought Pittsburgh was contending for a playoff bye week. That’s the environment Mike Tomlin has established to his credit. Grade: B

Unsung Hero Award
It is often said that fumble recoveries come down to luck. And a lot of times that’s true – sometimes the ball just bounces or doesn’t bounce, your way. But even when the bounce doesn’t come your way, a heads up player can turn a lose ball into an opportunity. So after the Colts had held the ball for nearly 8 minutes and gone 87 yards they looked poised to score again. But Matt Ryan could get the handoff right, the ball came out. He tried to dive on it, but Chris Wormley out muscled him and for that he wins the Unsung Hero Award for the 2022 MNF win over the Colts.