Tomlin is right. Especially when you consider the Steelers week one upset of the Bengals in the Queen City. That game featured:

The Steelers defense did all of the above in the return bout in Pittsburgh, yet it wasn’t enough.

For part of the game, the Steelers flashed the very best they could hope be at this point. For the rest of it they that proved they still have a lot of rebuilding to do. 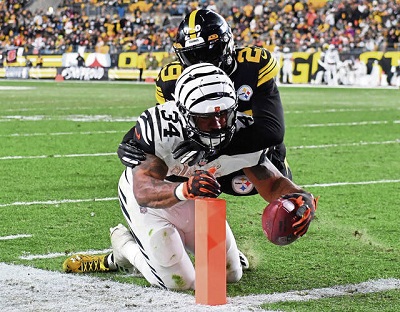 Seeing a Mirage in First Half Flashes

The digest version of this game would explain how the Steelers looked sharp in the first half only to disintegrate in the second. That’s an efficient yet inaccurate way to tell the story.

The truth is that the Bengals closed the first quarter with a 10-3 lead over the Steelers. By itself, that’s hardly damning. What was distressing was that Cincinnati made it look so easy.

But after a Steven Simms kick return set the Steelers up with a short field, Kenny Pickett converted 2 third downs to set up Najee Harris’ 19 yard touchdown scamper. Unfortunately, the Bengals answered with a touchdown of their own, it the Steelers were again down by 7. 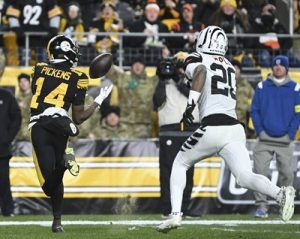 Matt Canada’s offense has struggled to find the end zone more than once a game, so no one would expect them to match Cincinnati touchdown for touchdown. Yet, that’s just what they did, as Najee Harris, Kenny Pickett and Diontae Johnson nickled and dimed the Bengals for several short gains until Pickett hit George Pickens from 24 yards out to score a touchdown.

No, the Steelers offense wasn’t executing with the lethal efficiency of one of Ken Whisenhunt units, let alone did it look like look like “The Greatest Show on Turf.” But it was answering a touchdown from a high powered offense with one of its own, and that been an uncommon sight in Pittsburgh for a long time.

The defense took it cue from the offense, as Levi Wallace short-circuited the Joe Burrow’s 2 minute drill with an interception at midfield. Mike Tomlin declined to take a tie into the locker room at half time, and with four play including a 27 yard strike to Pat Freiermuth, set the Steelers up for a Matthew Wright field goal that gave them the lead at half time.

Unfortunately, that was the high water mark for the offense during the game.

Too Few Defensive Fireworks in Second Half

Cincinnati’s 20 second half points make it easy to assume that Pittsburgh’s defense mailed it in during the second half. But that’s actually not quite the case.

It was the second half that brought those dramatic sacks from Cam Heyward, Alex Highsmith and T.J. Watt, the later of whom also had an amazing interception that looked like an exact replay of his week one pick of Joe Burrow.

They managed six yards after Watt’s interception and settled for another field goal. Two series later, the Steelers defense stoned Cincinnati’s offense for negative yards, bottling them up at Pittsburgh’s 7 and forcing a punt.

Najee Harris ripped off a 13 yard run to get the Steelers to Cincinnati’s 34. And then penalties pushed Pittsburgh back to the Bengals 49 yard line as the Steelers found themselves a 3rd and 25. Needless to say they failed to convert.

The Bengals marched 90 yards for a touchdown. Mike Tomlin described the two series as “a significant sequence in the game.” He was right. What followed was mere window dressing as the Bengals tacked on an insurance field goal while the Steelers scored a garbage time touchdown.

The Reality of the 2022 Pittsburgh Steelers

This is who the 2022 Pittsburgh Steelers are. The offense took a few steps forward, but it feels like it took a few steps back in the 2nd half. Najee Harris ran reasonably well, but Kenny Pickett struggled on third down. At other times the offense self-destructed with penalizes or poor play calls and/or poor execution, particularly on first down.

This was the first time Teryl Austin’s unit was at full strength since the season opener, with Minkah Fitzpatrick playing after suffering an appendectomy just six days earlier. And while the defense did do some nice things, Joe Burrow hooked up with Tee Higgins, at will; the Bengals had 6 players make catches of over 20 yards, and in the Red Zone Samaje Perine was “Mr. Automatic for Cincinnati.”

No, it doesn’t. But when all was said and done, the Cincinnati Bengals looked like a team shaking off his Super Bowl hangover and angling to make another run, while exposing the Pittsburgh Steelers as a team struggling to learn how to win games.