Taken from the grade book of a teacher who is sees his students’ glass as half full, here is the Pittsburgh Steelers Report Card from the 2022 win over at Acrisure over the Saints. 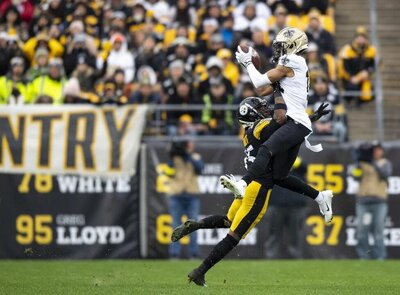 Quarterback
Kenny Pickett went 18 of 30 for 199 yards with no touchdowns, but most importantly, no interceptions. Pickett still looks like a rookie. He’s not seeing open receivers and his accuracy was off at times. Still, the Steelers converted 9 of 17 third downs. More importantly he got better as the game moved on. Grade: B-

Running Backs
The Steelers had their highest rushing totals since December 2016 when Le’Veon Bell broke the franchise rushing record. This time it was a team effort, with Najee Harris having his best day of the year, logging 99 yards while Jaylen Warren adding 37 more, the bulk of which came during when it was needed to kill the clock. Derek Watt had 2 runs for 5 yards, both of which converted 3rd and 4th downs. Grade: A

Tight Ends
Pat Freiermuth had 4 catches for 36 yards, but that stat doesn’t do justice to the one handed catch he made of a ball that Kenny Pickett gunned at him. Zach Gentry had one pass thrown his way which was deflected. Connor Heyward had two catches for 9 yards. Grade: B –

Wide Receivers
Diontae Johnson led the group with 4 catches for 36 yards including a 36 yarder. George Pickens added 3 for 32 yards, but also contributed with a 22 yard end around. Gunner Olszewski had 1 catch for 4 yards, while Steven Sims and 1 catch for 15 yards and 2 carries for 2 yards, the second of which converted a third down on the final, clock killing drive. Grade: B –

Offensive Line
On the plus side, the offensive line’s progress in run blocking continued. While no one would mistake their efforts for Road Grading, Steelers running backs did have holes to run in. However, pass protection was weak, as Pickett suffered 6 more sacks. Not all of those are the line’s fault, but protection must improve. Grade: C

Linebackers
T.J. Watt only had 4 tackles and one QB hit, but his presence was felt throughout, whether it was stopping guys at the line of scrimmage, snuffing out QB scrambles or drawing double teams…. And those double teams helped Alex Highsmith, who had two sacks, including a strip sack that helped end New Orleans final possession. Devin Bush quietly had another good game. Grade: A

Secondary
Wow. What a difference interceptions make. Damontae Kazee’s 4th quarter interception set up the Steelers final touchdown while Levi Wallace ended the Saints final possession. Arthur Maulet’s stat line reads 3 tackles 2 solos and 1 pass defensed. Nice, but it doesn’t do justice to the incredible play he made. The Saints were 3-12 on 3rd downs. Giving up a TD on a two minute drive brings this group’s grade down. A smidge. Grade: A-

Special Teams
Pressley Harvin punted 3 times, nailing the ball into the 20 twice and none of his punts were returnable. The Steelers kick coverage was sound, and Steven Simms looked good in his lone kick return.

Matthew Wright, however, missed two of his field goals and his kickoffs were short. Grade: C-

Coaching
The Steelers entered the bye week as a 2-6 team that had gotten its tail kicked be a Super Bowl favorite. They exited it looking like a team that used its week off to get “back to basics.”

Matt Canada’s offense finally looked like an winning offense. Yes, the Red Zone remains an issue and a tendency to rely on trick plays is forming. But they scored twice at the goal line through smart execution. 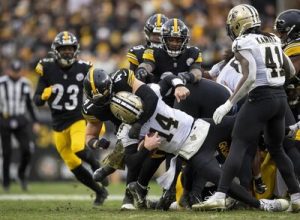 Teryl Austin’s defense put on the most complete performance of the season. Were it not for the late 2nd half hiccup, there’s a strong chance the Saints never see the end zone.

Through it all, Mike Tomlin has kept his eye on establishing sound fundamentals, and that focus paid off. Grade: A-

Unsung Hero Award
This player led the team in tackles, the first two of which went for third down stops. He also made several other stops for no gain, with the biggest coming against Andy Dalton on 4th down with 7:47 left to play and for that Robert Spillane is the Unsung Hero of the Steelers win over the Saints.