Final scores can be tricky things. They tell you who won but don’t explain why.

The record books tell us that 50 years ago the Pittsburgh Steelers won their first playoff game by defeating the Oakland Raiders 13-7. But that number tells us nothing of the Immaculate Reception, the greatest play in the history of football, where Franco Harris staked his first claim to greatness.

While no one in the Black and Gold authored any monumental plays in this game, the Steelers prevailed because, in the words of Mike Tomlin “…it was a grow-up evening for us tonight.” 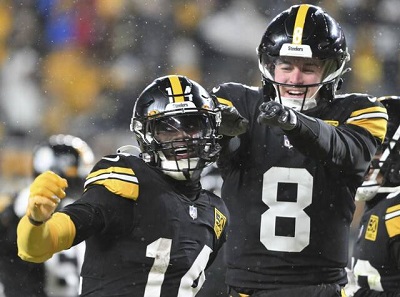 The True Test of a Legacy

Sports writers, yours truly included, love to write about heritage or legacies left by those who came before. The Pittsburgh Steelers are one of the NFL’s most storied franchises, sharing space occupied by teams led by the likes of Lambeau and Lombardi, Halases, Brown and Landry.

Mike Tomlin embraces this reality. As he declared during his opening statement:

We had a chance to be a part of Steeler history tonight and, man, we don’t take that lightly. We’re just so appreciative of the ground that’s been laid by those that have come before us, the men like this man’s jersey that I’m wearing right here.

But when it comes to organization building, the true test of a legacy isn’t whether those carrying on its mission today remember the legacy, but whether they can add to it.

The Oaklan… ur um, Las Vegas Raiders tested the Steelers faith to their legacy on both sides of the ball.

Just two weeks ago the Baltimore Ravens flocked into Acrisure Stadium and committed the worst possible insult a divisional opponent can lay on the Pittsburgh Steelers: They made them look soft.

The Steelers rebounded against the Carolina Panthers, but the Raiders brought the NFL’s leading rusher Josh Jacobs. Not only did the Raiders have Jacobs, but they also had a host of other weapons.

By the time 8 minutes and 22 seconds of the first quarter had expired, the Raiders had put 7 points on the board and Josh Jacobs had run for 26 yards on 5 carries – an average that would decimate the Steelers of he could sustain it. 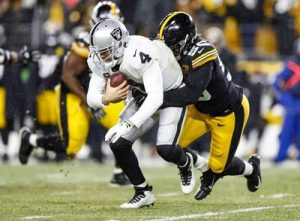 Meanwhile, Kenny Pickett threw an interception six plays into the third quarter – if the Steelers were going to win this game, the defense would have to be special. They were:

After the Steelers went ahead, Larry Ogunjobi pressured David Carr into throwing a pass a little too soon. So instead of hitting Hunter Renfrow deep, Cam Sutton jumped the route and intercepted Carr for the third time that evening.

The knock on Matt Canada and the Steelers offense, at least since Kenny Pickett took the helm, has been that they can’t finish drives. While there’ve been times when the Steelers have teased they might change this – see last week’s effort against the Panthers – thus far the field goal has been their most consistent weapon.

When Cam Heyward wrecked the Raiders 5th drive of the 2nd half with a 10 yard sack of David Carr, the Steelers responded to the ensuring punt…

…with a three play, nine yard drive, that featured 2 good runs by Najee Harris, followed by Kenny Pickett failing to convert a third and 1. Pickett’s play in those first 55 minutes of the game had been shaky at best. Although he’d only thrown one interception, he’d had enough other misfires to lead one to question whether the game was too big for him or at the very least might be hitting the proverbial “rookie wall.”

The Steelers defense stone walled the Raiders on the ensuring drive, giving Pickett and the offense one last chance.
Pickett’s poise carried the day for Pittsburgh. With 2:55 remaining, Pickett started by throwing 8 straight passes: 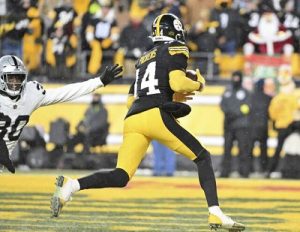 After completing 6 of 8 passes Pickett saved his best for last, launching a 14 yard laser to George Pickens in the end zone to give the Steelers their first lead with 46 seconds left.

Thanks to some crafty pass defense by Levi Wallace, Sutton’s interception, and Connor Heyward’s 21 yard scamper that including him sliding while in bounds to keep the clock running, the Steelers held that 13-10 lead.

13-10 isn’t an impressive victory margin. But if Pickett and the rest of the offense can sustain the growing up that Mike Tomlin alluded to, the true margin of victory will be much greater.