The Pittsburgh Steelers defeated the Atlanta Falcons 19-16 at Georgia’s Mercedes Benz Stadium. The win came in their second road game on a Monday Night Football shortened week giving them their first consecutive victories of the 2022 season.

The Steelers won in Atlanta because, to borrow the words of Roland Deschain from Stephen King’s Dark Tower series, “They remembered the faces of their fathers.” 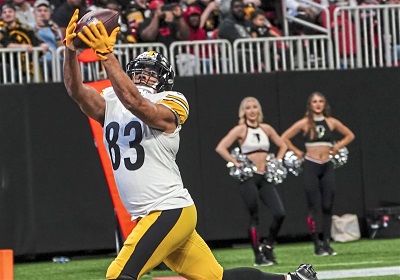 Steelers Remember the Faces of Their Fathers

Roland Deschain is the Dark Tower’s protagonist acting as a sort of mythical knight in the form of an old Western gunslinger (Clint Eastwood’s character in Pale Rider is a good metaphor). A fully summary of an 8 book a 4,250 pages’ series is impossible here, but whenever Roland implores something critical to his katet or posse, he does so by reminding them to “Remember the face of your father.” 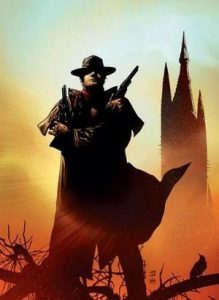 “Remembering the face of your father” serves as a fitting motif for a game that saw Cam and Connor Heyward step with big plays in honor of their father, the late great Craig “Iron Head” Heyward, but that’s part of the motive driving this motif.

After the Steelers 2009 season, Art Rooney II called out his team’s inability to rely on the run in critical situations, describing rushing the football as one of the franchise’s foundations.

A week ago, the Steelers defeated the Colts because they were able to lean on backfield depth after losing their top two backs to injury.

And both players played well. But Mike Tomlin and Matt Canada didn’t hesitate to rotate in Benny Snell when necessary. They even continued to rely on Derek Watt who converted yet again in short yardage situations. 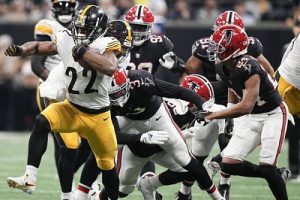 Najee Harris looked like a first round pick vs Falcons. Photo Credit: AP, via Tribune Review

Najee Harris’ 86 yards on 17 carries were impressive as were Benny Snell’s 24 yards on 6 carries. Jaylen Warren’s 5 yard carry was more economical, but it converted a third down on a field goal drive.

Pittsburgh’s running game wasn’t perfect. Matthew Wright’s 4 field goals show that the Steelers are still struggling in the Red Zone, but by relying on an effective running game, the Steelers gave themselves a chance to win.

Even since Mitch Trubisky came off the bench and sealed the win over Tampa Bay, plenty of outsiders have called on Mike Tomlin to bench Pickett and allow the rookie to learn from the sidelines.

After the Philadelphia disaster, Bill Cowher suggested Tomlin was putting Pickett’s confidence in jeopardy. Following the beating from the Bengals, Gerry Dulac of the Pittsburgh Post-Gazette pointed to other rookies who’ve been shown the bench around the league suggesting the Steelers follow suit.

A week ago, Kenny Pickett stepped up and put a tough throw trhough a tight window to George Pickens on third down in what would be the game winning touchdown drive. Against the Falcons Kenny Pickett hit Pat Freiermuth 3 times on third down, converting each one.

And with Pittsburgh holding a 3 point lead and sitting on 5 minutes of clock to kill, the Steelers alternated effective running with passes to Zach Gentry and Diontae Johnson, both of which converted third downs.

This goes beyond not throwing an interception.  He’s also tucked and run with it when it’s been wise to do so and otherwise thrown it away rather than force a dangerous pass.

And as the read he made on Connor Heyward’s touchdown catch shows, Pickett is doing far more than just driving without denting the back bumper.

Taking a 16-6 lead into half time isn’t normally an occasion for saying that the leading team is stomping on its opponent, but that was indeed the case with the Steelers defense in the first half. 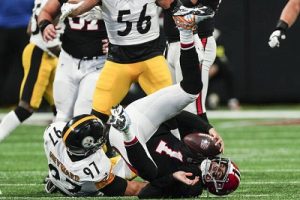 There weren’t a lot of fireworks, save for Cam Heyward’s sack of Marcus Mariota, but the Falcons could get nothing going. Indeed, had the Steelers been able to trade one of Matthew Wright’s field goals into touchdowns, they very well may have put the game away at the half.

They remembered that they had the trio of Cordarrelle Patterson, Tyler Allgeier and Caleb Huntley who could run the ball. And Atlanta began letting them run the ball, daring the Steelers to stop them.

As Atlanta played Smash Mouth football to work its way down to the Steelers 10 yard line with 7 minutes left to go, it looked like the lead to this article was going to be that the Steelers had forgotten the faces of their fathers.

But thanks to stout play by the two Cams, Cam Heyward and Cam Sutton, the Steelers defense forced a field goal. But two more players were to step up before this was over.

Harvin Hits It on a Dime, Setting Up some Minkah Magic 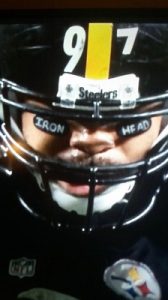 After forcing a field goal the Steelers offense couldn’t put the game away, but thanks to the smart play by Kenny Pickett, Najee Harris and Benny Snell mentioned above, they burned off four minutes and 45 seconds off of the clock – including all of Atlanta’s time outs.

Marcus Mariota had 42 seconds to get the Falcons into field goal range with no timeouts. He wasted little time in taking a deep shot to Drake London and Minkah Fitzpatrick wasted even less time in jumping the route, intercepting his pass and returning in 16 yards before running out of bounds.

With the game on the line, Harvin and Fitzpatrick made big, smart plays – truly remembering the faces of their fathers.