From the gradebook of a teacher who is almost as pleased by the fact that he was able to work a Dark Tower reference into his analysis (see the link at the end) as he is about the Steelers back-to-back wins, here is the Pittsburgh Steelers Report Card for the 2022 road win over Atlanta. 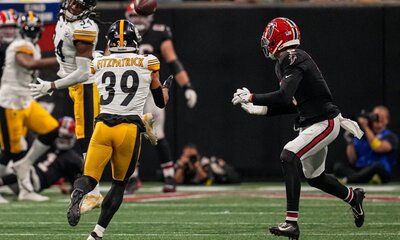 Quarterback
Kenny Pickett went 16 of 28 for 197 yards with one touchdown and for the fourth straight week – no interceptions. Steadily but surely, Pickett continues to improve. Grade: B

Running Backs
Najee Harris had 86 yards on 17 carries, followed by Benny Snell with 24 yards on 6 carries, Jaylen Warren with 15 yards on one carry and Derek Watt with 1 carry for 4 yards that converted a 3rd down. So the top 3 running backs plus the full backs get carries in consecutive games for the first time in memory. And the Steelers get their first consecutive wins of the season. Coincidence? I think not. Grade: A

Tight Ends
The stat sheet tells you with Pat Freiermuth caught 3 passes for 76 yards on 5 targets and that Zach Gentry caught 1 for 8 yards on one target, and the Connor Heyward caught 1 pass on one target for 17 yards. Gentry’s catch set the Steelers up with a 2nd and 2 with 4:50 left in the game; teach of Freiermuth’s touchdowns converted a 3rd down, and Heyward scored the only touchdown. The Steelers tight ends showed just how much damage you can do with 5 catches. Grade: A

Wide Receivers
Diontae Johnson led the unit with 5 catches for 60 yards on 11 targets. But he dropped at least one critical catch and got gift call on a play that should have been a fumble. Steven Sims didn’t catch either of the passes thrown his way, but did look good on reverses. Gunner Olszewski had 2 reverses for 2 yards. George Pickens had one catch for two yards and made little secret of his unhappiness with getting targeted – this attitude must NOT continue. Grade: C-

Offensive Line
Kenny Pickett was not sacked for the entire day and he only took 4 QB hits. Equally impressively, the Steelers offensive line dominated the line of scrimmage opening holes for the runners. This unit is coming along. Grade: B+

Defensive Line
Cam Heyward had a difference making sack early in the game. Larry Ogunjobi decisively dropped Cordarrelle Patterson for a loss that forced a field goal. Expecting the pass the Steelers took Montravius Adams and the Falcons ran very well in the second half. The line shoulders some of that. Grade: B-

Secondary
The Falcons were 3-10 on third downs. Minkah Fitzpatrick led the unit and the team in tackles, including one for a four yard loss that helped stall a drive, and of course he authored the interception that ended the game. The secondary did get a little squishy in the 2nd half, but went into “Bend but don’t Break” mode in the Red Zone. (Although Arthur Maulet should have been flagged for pass interference). Overall a strong afternoon for the secondary. Grade: B+

Special Teams
What a difference 1 week makes. Matthew Wright hit all four of his field goals and completely neutralized Cordarrelle Patterson on kick returns. Pressley Harvin did a spectacular job pinning the Falcons down, while Myles Boykin downed the ball deep Steven Sims shaky punt returns drops this grade, but special teams was a difference maker for the Steelers. Grade: A-

Coaching
Is it me or does Matt Canada’s play calling suddenly look smarter now that his rookie quarterback is maturing and his offensive line continues to jell? During the first half the Steelers executed their physical, ball control brand of offense to perfection outside of the 20s. They didn’t do quite as well in the 2nd half, but killed the clock when necessary.

One defense the Steelers completely unhinged the Falcons during the first half. During the second half the Falcons reverted to their roots, and ran the ball effectively. Some of that success likely can be laid to the feet of the Steelers moving away from their base defense. 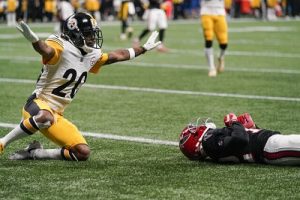 George Pickens temper tantrums are a cause for concern as is the coaches obvious attempt to pacify him with a cheap catch, which would only seek to encourage the temperamental rookie. With that said, it was the Steelers, and not the Falcons who were playing like a team 1/2 game out of first place, as Mike Tomlin led the Steelers to their road win since playing a road game on Monday Night Football. Grade: B

Unsung Hero Award
Atlanta didn’t have a lot of luck through the air. But they did take their shots down field. And although he’s only credited with one pass defense, Cam Sutton played a huge role in keeping the Falcons from landing in the end zone on more than one occasion and for that he is the Unsung Hero of the Steelers win over Atlanta.