The Pittsburgh Steelers fell to the Baltimore Ravens 16-14, losing out in the battle of the backup quarterbacks. The loss snapped the Steelers 2 game winning streak and the Ravens four game losing streak against Pittsburgh.

As Mike Tomlin conceded during his press conference, there’s nothing mystical about it:  When you turn the ball over 4 times in the Red Zone, you’re going to lose. Even if that is true, and it is, the Steelers still had a chance to win. They didn’t because they fell short on another, more ominous fundamental. 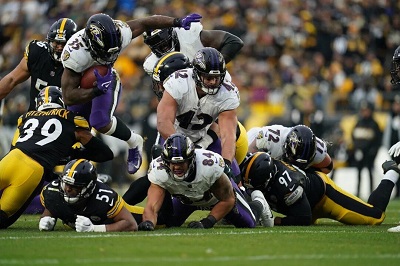 The win over the Falcons provided an affirmative example of why Mike Tomlin has been smart to stick with Kenny Pickett, despite calls from outside the franchise to sit the rookie. The loss to the Ravens provides a negative one.

The offense has improved, outside the Red Zone at least, the improvement has flowed the way molasses drips down the side of a bottle. The positive is that the drip’s progress is sustainable – unless something acts on it from the outside. 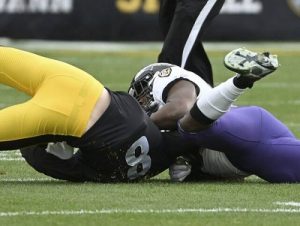 That caution virtually eliminated turnovers from Pickett’s game, yet that caution came at the cost of settling for field goals instead of touchdowns.

After just two series (and two punts), Pickett left the game in the concussion protocol, giving way to Mitch Trubisky. And Tribusky certainly provided the proverbial “spark” to the offense.

Najee Harris lunched himself into the end zone, cutting Baltimore’s lead to 3. The decisiveness, and the downfield aggressiveness that had been missing from the offense was back. I daresay the series reminded me of the tiempo pickup we saw when Joe Gibbs benched Jay Schroeder in favor of Doug Williams against the Lions back in ’87.

But Tribusky’s aggressiveness carried its own cost. His next two series ended with a Red Zone interception and another interception just outside the Red Zone. Instead of settling for a Chris Boswell field goal, the Steelers got nothing.

Yet despite turning the ball over four times on three possessions which could reasonably have ended with Chris Boswell field goals, the Steelers were in the game till the very end.

Normally turning the ball over four times yet still having a chance to win amounts to a tiny silver lining. That’s not the case here.

The Steelers defense had a chance to win this game. And the Steelers salary cap decision tell us that this defense was built to win games just like this.

Those Splash plays were nice, but the Steelers defense came up short on bread and butter plays. Fitzpatrick’s hit on Huntley forced him from the game, bringing in Ravens 3rd string quarterback Anthony Brown. 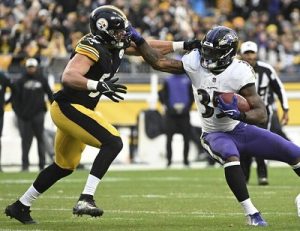 The Steelers defense knew the run was coming. They tried to stop it. They failed. J.K. Dobbins and Gus Edwards hung 186 yards on Pittsburgh.

Sure, the Steelers limited the Anthony Brown-led Ravens offense to one field goal. But the field goal drive saw the Ravens rip off runs of 5, 14, 6, 7 and 7 yards. Patrick Ricard also converted a 3rd and 1. Oh, and the Steelers had done a good job of taking Mark Andrews.

The worst play for the Steelers run defense came last: Gus converted a 3rd and 3, gaining 6 yards thanks to a Minkah Fitzpatrick stop.

You know your run defense is “choto” (Argentine slang for… coming up short er um, anatomically , discussed here) when it is 3rd and 3 after the 2 minute warning where a stop gets you the ball back and your free safety makes the tackle.

That singular failure in the trenches illustrates why the Ravens are leading the AFC North and why the Pittsburgh Steelers appear destined to author the first losing season of the Mike Tomlin era.