Taken from the grade book of a teacher daring to dream that his classroom once again features a franchise quarterback, here is the Pittsburgh Steelers Report Card for the 2022 win over the Baltimore Ravens at M&T Bank Stadium. 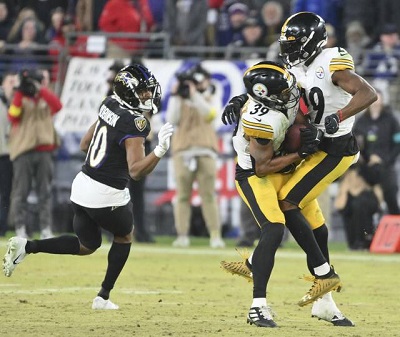 Quarterback
Kenny Pickett’s stat line of 16 of 27 for 168 yards and one touchdown appears so “pedestrian” at first glance. But there was nothing pedestrian about the poise and playmaking instincts he showed on his final pass. Grade: A-

Running Backs
Najee Harris had his first 100 yard game, a 111 yard one to be exact, mixing long runs and tough yards on 22 carries. Jaylen Warren ran for 76 yards on 11 carries with Derek Watt converting a 3rd and 1 for 3 yards. Warren and Harris combined for 5 catches, none more important that Harris’ game winner. Harris also pushed Pickett on a 4th down conversion. Grade: A+

Tight Ends
Pat Freiermuth had 3 catches on 6 targets for 36 yards to lead the team, but his 20 yard catch brought the Steelers to midfield on the game winning drive. Neither Zach Gentry nor Connor Heyward had a catch, but contributed to run blocking. Grade: B

Wide Receivers
Diontae Johnson had 2 catches for 35 yards, Steven Sims had 3 for 34 yards and George Pickens “only” had 2 for 29 yards. Miles Boykin didn’t have a catch, but helped push Kenny Pickett across the line on a QB sneak. Gunner Olszewski executed a nice reverse and made a key block on Warren’s long run. Plays like that, along with the receiver’s stats won’t make Fantasy Football owners happy.  But the reality is that the quality of each individual play is why the Steelers playoff hopes are alive. Grade: B+

Offensive Line
Kenny Pickett was sacked twice and hit nine times. The latter number is too high, but is OK given the context. However, the offensive line contested the line of scrimmage from the very beginning and paved the way for the best rushing effort of a Steelers offense since Le’Veon Bell’s prime. Grade: B

Defensive Line
Cam Heyward led the unit with 4 tackles followed by 3 by rookie DeMarvin Leal. What the stat sheet doesn’t show is the number of times the Ravens rushers were either stopped for zero or minimal gain. An excellent night for the line. Grade: A

Linebackers
Robert Spillane led the unit with 8 tackles including one for a loss. T.J. Watt “only” had one sack, but it came two plays after J.K. Dobbins 22 yard run and helped ensure it was the last run of the night. Watt also had another tackle for a loss and 3 other QB hits. Alex Highsmith and 3 tackles – for little or no gain. Grade: A

Secondary
The Ravens were 5 for 12 on third downs. And for the second consecutive week, an opponent’s desperation comeback attempt ended with a Steelers interception, this time at the hands of Minkah Fitzpatrick, who also led the unit in tackles. Grade: A

Special Teams
Chris Boswell missed a field goal, although he made 3 others including a 51 yarder. The Steelers gave up a long kickoff return, only to have their defense deliver a save. Pressley Harvin averaged 5 yards a punt including one inside the 20. Grade: C-

Coaching
Complainers about Matt Canada’s offense will find plenty of fodder given the Steelers partly pass numbers, sluggish Red Zone performance and settling for field goals instead of touchdowns. Again.

So be it. The Baltimore Ravens are on of the toughest teams in the NFL to rush on, and the Steelers waltzed into their home and rushed the ball down their throats earning a 10 point advantage in the time of possession.

On defense Teryl Austin and Brian Flores decided that the Ravens weren’t going to repeat their success running against the Steelers, and deployed a 4-4-3 scheme that featured 2 rookies to stop the Ravens. And stop the Ravens they did.

Eight weeks ago the Steelers record was 2-6. They’d just gotten thrashed by the Philadelphia Eagles, and talk both inside and outside of Pittsburgh was how high within the top 5 of the draft the Steelers would fall.

But Mike Tomlin committed his team to playing to win, his players bought into it, and today their playoff hopes remain alive. Grade: A 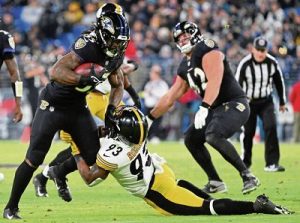 Unsung Hero Award
Mike Tomlin hesitates to praise rookies too much. Yet after the Ravens game he described this individual as “combative” and “confrontational” urging that those characteristics were “needed.” Seven tackles on 50% of the defensive snaps were enough to make Mark Robinson the 3rd leading tackler of game and for that he win Unsung Hero honors for the 2022 win over the Ravens at M&T Bank Stadium.