This April marks the 35-year anniversary that I was allowed to stay home from school and watch the 1987 NFL Draft.

Maybe it wasn’t the best parental decision my mom ever made, but considering I am able to encapsulate my feelings about that day so many years later while utilizing my gift of writing, well, maybe it was a smart choice, after all. 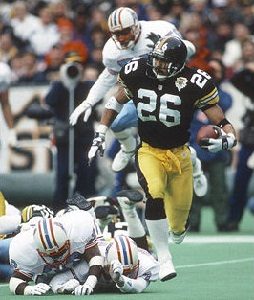 Anyway, 1987 was the last year that the annual draft was held on a weekday — Tuesday–and started at 7 a.m. Exactly one year later, it was held on Sunday, which would be the NFL’s day of choice for the event for many springs after, and it started at noon.

Obviously, the NFL Draft continued to become a sports phenomenon over the years and has grown so much, not only is it now a primetime event that starts on Thursday and dominates an entire weekend, its ratings are superior to actual sports contests held by its rivals — including the NHL and its Stanley Cup Final.

It’s something that I should have a tremendous appetite for at this point in my life, especially with such easy access to all things NFL Draft — thanks to the explosion of both cable and the Internet, there is now round-the-clock coverage, endless mock drafts and the ability for any fan to do all of the research necessary to become an expert on all of the prospects.

Back in the late-’80s, however, when I was about as obsessed with the draft as I’d ever be, I would have given anything to have access to the information that I do right now.

My obsession with the draft truly started in 1988 — the year that would see the Steelers select Aaron Jones in the first round — and began to subside after Bill Cowher took over as head coach in 1992 and soon showed me that winning playoff games and being an annual Super Bowl contender was far-more exciting and satisfying than studying draft prospects and hoping that a “known name” would come to town and rescue the black and gold.

I wasn’t super stoked about the draft in ’87, but I wanted to watch it, and I was more than excited when my mom let me stay home from school. I didn’t know who Rod Woodson was, but I quickly learned that it was quite the coup that Pittsburgh, a team that had drafted ninth a year earlier and selected some guard named John Rienstra, had landed this talented cornerback from Purdue with the 10th pick.

The Browns, the Steelers’ fierce rivals in the old AFC Central Division, had a shot at Woodson with the fifth pick, but, instead, chose Mike Junkin, an inside linebacker from Duke.

Junkin went on to play in 20 games over three seasons before his NFL career went up in smoke.

In Cleveland’s defense, a lot of teams missed out on Rod Woodson, who was the only First-Ballot Hall of Famer from the ’87 draft class. In fact, legendary wide receiver Cris Carter, who was inducted in 2013, was the only other Hall of Fame member to come out of the 1987 NFL Draft.

As I said, it was quite the coup for the Steelers to land a generational talent such as Rod Woodson, and do so after nine other teams had already passed on him in the first round.

Chuck Noll said he was “in love” with Woodson not long after making the selection (you could see why it was love at first sight for the head coach who spent most of his post-Super Bowl years futilely trying to find love in the first round).

Again, I didn’t know anything about Rod Woodson–never even heard of him prior to the draft — but I was excited that so many others were excited about the Steelers landing him. 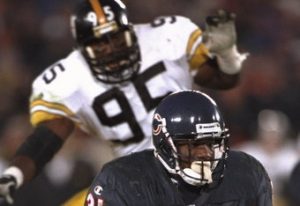 Greg Lloyd closes in on the Bears Rashaan Salaam in the Steelers 1995 win over the Bears. Photo Credit: Jonathan Daniel, Getty Images via the Bleacher Report

All-in-all, the Steelers’ ’87 draft was one of Noll’s finest over his last 15 years or so as head coach of the team. In addition to Woodson, Pittsburgh selected cornerback Delton Hall (round two); safety Thomas Everett (round four); linebacker Hardy Nickerson (round five); linebacker Greg Lloyd (round six); and running back Merril Hoge (round 10). Most would go on to have lengthy and distinguished careers — both with the Steelers and with other teams (Everett was a two-time Super Bowl winner with the Cowboys, for example) — and Woodson, Lloyd and, to a lesser extent, Hoge, went on to become vital members of Cowher’s playoff teams of the 1990s.

While I was super-hyped for the next several drafts–as many tend to do now, I was devouring every morsel of draft coverage I could find weeks and months before the event–none of them lived up to 1987.

To reiterate, the 1987 NFL Draft was the greatest one I ever watched, and I’ve been chasing that feeling ever since.

Maybe my mom knew what she was doing, after all.