Tomorrow Mike Tomlin will attempt something that neither Bill Austin, nor Chuck Noll nor Bill Cowher ever did:

While Philly fans are loyal, there’s no question that when it comes to Pennsylvania’s two football teams, the Pittsburgh Steelers are the Keystone State’s 800-pound gorilla. The Steelers lead the Lombardi count 6 to 1 and have appeared in the Super Bowl 8 times compared to 3.

And of course the Steelers lead the Eagles in other measures such as games won since the NFL-AFL merger, division titles, playoff appearances, wins etc. And the Steelers count on a nationwide, no, global fan base.

The last time the Steelers won a game in Philadelphia was at Franklin Field on Sunday, October 24, 1965 during Mike Nixon’s lone season as coach. 20,825 days have passed since the Steelers clocked that milestone, in case you really, really want to know. It isn’t just the the Steelers 57 year losing streak there:

In 1997 alone, Philadelphia marked the end of Greg Lloyd’s Steelers career. Heck, the last time the Steelers scored a touchdown in Philly was when Kordell Stewart connected with Will Blackwell.

Much Has Changed Since the Steelers Last Win in Philly

A lot has changed since Steelers last win in the City of Brotherly Love.

Their last win came 360 days before my older sister was born (she’s a Ravens fan, but we still love her just the same) so suffice to say I have no memory. And although my parents were newlyweds living in Pittsburgh in 1965, they’re not much for sports so its no use asking them.

In 1965, man on the moon was more fiction than science. In fact, the headline of October 25th Pittsburgh Press tells us that the Gemini Mission has been Scrubbed as Agenda Fails. The Post-Gazette led with Gemini story too. Except the Post-Gazette tells us Gemini Launching, Space Docking a ‘Go.’

The first Gemini Space rendezvous occurred later that December, but it was supposed to happen in October. (The lesson then, as it is now, is that you need to read beyond the headlines.)

Just below that story, the Post Gazette tells us that UK Prime Minister Harold Wilson is off to Rhodesia for talks with the white settler government who was vying for independence. “Rhodesia” is now best known (at least in Argentina) as a chocolate bar, and the country in question is Zimbabwe.

The Pittsburgh Press devotes about a 1/3 of its front page to Vietnam coverage, and talks about the record low 25- degree temperature Pittsburgh experienced that weekend. It also informs us that the Civic Arena turned its first profit for the first time since it opened in 1961.

Digging into the Post-Gazette you see that Giant Eagle is selling Roast Pork Butt for 49 cents per pound. The same add tells us that a 9 oz package of Scallops would set you back 89 cents.

Not to be out done, A&P is selling “Long Bologna” for 49 cents a pound and Jane Parker Large Apple Pie for 39 cents (normally it would have cost 49 cents, the ad assures us). In between the two adds, you learn that you could have bought a Polaroid Swinger Camera for $19.95.

Yes, times have changed. But has enough changed for the Steelers to recapture some of that 1965 magic?

Art Rooney Sr. was notoriously bad at hiring head coaches. Yet even he knew Mike Nixon wasn’t the man for the job. When Dan Rooney accepted/forced Buddy Parker’s resignation during the 1965 preseason, Art Rooney reportedly called Nixon, told him he was going to offer him the job but encouraged him to reject it because he wasn’t ready.

Nixon ignored The Chief’s advice, accepted the job and then preceded to lose his first five games as Steelers head coach. Game six brought the Steelers to Philly, and thus began Mike Nixon’s 15 Minutes of Fame. 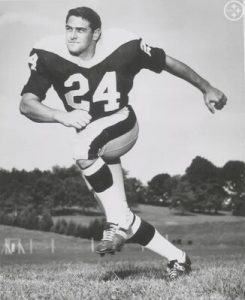 But by the look of the box score, it was an UGLY win. Quarterback Bill Nelsen went 6 of 16 for 79 yards. Running back Mike Lind also got 16 carries, managing 30 yards, but he did catch 2 passes for 11 yards including a touchdown.

The highlight of the day, and one would presume the season, came in the 2nd quarter when safety Jim Bradshaw returned an interception 82 yards for a touchdown, which was one of 3 picks for a total of 101 yards.

The Steelers would win again the next week 22 to 13 over the Dallas Cowboys back at Pitt Stadium. So Mike Nixon can hang his hat on the fact that he’s one of the very few head coaches who went undefeated against Tom Landry during his career.

Alas, after beating Landry, Mike Nixon’s Steelers lost their next 7 games finishing the season 2-12, and Nixon got fired.

Nixon did enough to impress Eagles coach Joe Kuharich, who hired him as an assistant coach, giving Nixon three years of gainful employment before he faded into a footnote in Steelers history.

It is doubtful. But I’ll wager that Kenny Pickett will pass for more than 79 yards and Najee Harris will run for more than 30 (well, he’d better.) Who knows? But even if Minkah Fitzpatrick has an 82 yard pick six, expect the Eagles to win and the Steelers to take a 2-6 record into the bye week.